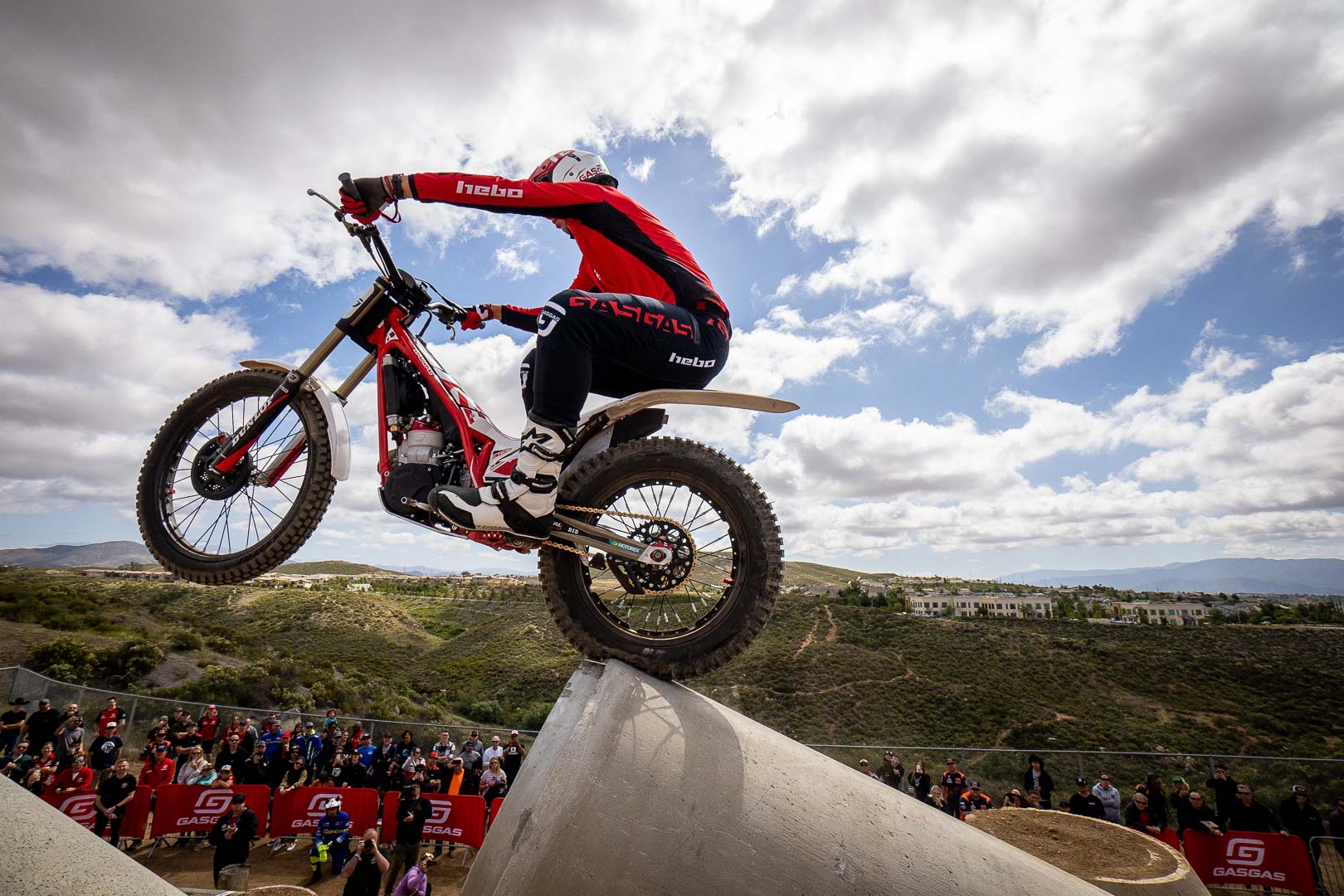 
GasGas took wins in all three classes at the 2022 California Trials Invitational. The third running of the event at the GasGas Trials Team facility in Murrieta featured 12-time AMA/NATC MotoTrials National Champion Pat Smage for the first time. As there are no National points on offer, it features friendly competition among the top riders in the United States. The California Trials Invitational is a media event presented by GasGas to promote observed motorcycle trials. Fox Sports 1 will be covering it on May 26 at 11:30 a.m. EDT.

“Since the KTM Group acquired the GasGas brand in 2019, we’ve been putting our heads together to try and promote the sport, and this is one of the ways we could do it,” GasGas Trails Team Manager Geoff Aaron—a 10-time National Champion—explains. “Doing it in the small footprint, having the TV coverage, and promoting our pro riders is a really cool way for us to show off our training facility, put more eyes on the sport, and hope that we can have a stronger future for it.”Josh Roper, who has finished in the runner-up spot behind Smage at the first two rounds of the 2022 AMA/NATC MotoTrials National Championship Series, nailed down a rare victory over the 31-year-old Smage. Smage has not finished behind a North American competitor in a National round since 2016, and has not been off the podium since 2006.“I ended up pulling out a win here at the CTI presented by GasGas, and it was a really good day!” Roper enthused. “I felt really solid on the bike, and it kind of came down to the very last second, and I somehow managed to pull away with the win. I’m very happy and want to give a big thanks to the whole GasGas USA team. The course was pretty difficult. It was a lot more technical than normal, but, overall, it was really fun and a fantastic course.”

The California Trials Invitational is a more compact event than the US Nationals, resembling an indoor trial more than an outdoor competition. The six sections are just a few feet from each other on purpose-built obstacles, rather than on a long loop and sections over natural terrain. The riders ride together, instead of independently, and there are only two loops. This means the winner is decided on 12 scored rides, not the typical 36 sections.Roper, a GasGas Trials Team rider, cleaned five of the six sections on the first loop, putting him in the lead over Smage, who was adjusting to the format. The lead exchanged hands, with Roper needing a clean in the final section to beat FactoryOne Sherco’s Smage Roper pulled off the clean ride, and Roper bested Smage by a 4-5 margin, giving Roper his second consecutive California Trials Invitational win. Roper’s teammate Daniel Blac-Gonnet rounded out the podium with a 33-point total.

“This event was definitely unique for me,” Smage said. “Having not done this before, I learned quite a bit about what this event is all about, but it definitely didn’t help my confidence early on. I felt shaky all day and took some single points, and there was no room for error with how Josh was riding. I’m definitely glad I came out and got to experience it before I’m done competing.”The Women’s Pro class pitted four-time AMA/NATC MotoTrials Women’s Pro National champion Maddie Hoover on a GasGas against Sherco-mounted two-time California Trials Invitational winner Louise Forsley. The pair were tied after the first loop, with Hoover stepping it up on the second loop for a convincing 21-28 win.

“I started off the day pretty shaky,” Hoover admitted. “I wasn’t feeling very confident, and it took about four sections to finally start riding and not stress about the results. The second lap picked up, and I was feeling really good going in with only four points in the last section and, unfortunately, I took a five in the last section, which I’m not too happy about. But I managed to pull out the win today. It’s really exciting because I’ve never won this event and Louise is very formidable competition. So, it’s a good feeling, and I’m glad that everybody had fun today.”

“I had a pretty good day today,” Murphy Aaron said after his win. “The first loop started off pretty good and I kind of messed up at the end, but the scores were close going into the second loop. That was a little nerve-wracking at first. I messed it up at the beginning and somehow pulled it off at the end. It was for sure a hard trial, but I got through it and had fun.”

“I’m really proud of this event and what it has grown into over the last three years,” Geoff Aaron said. “It’s always a challenge for me to create these sections for these riders. They keep getting better and better every year. Quite honestly, we got beat pretty bad the last two years, so this is a nice redemption for GasGas to take the wins in all three classes, and it’s just a great promotion for the sport of trials.”Photography by Casey Davis

Next Level Electric Scooter coming to the US market PAJ GTS!