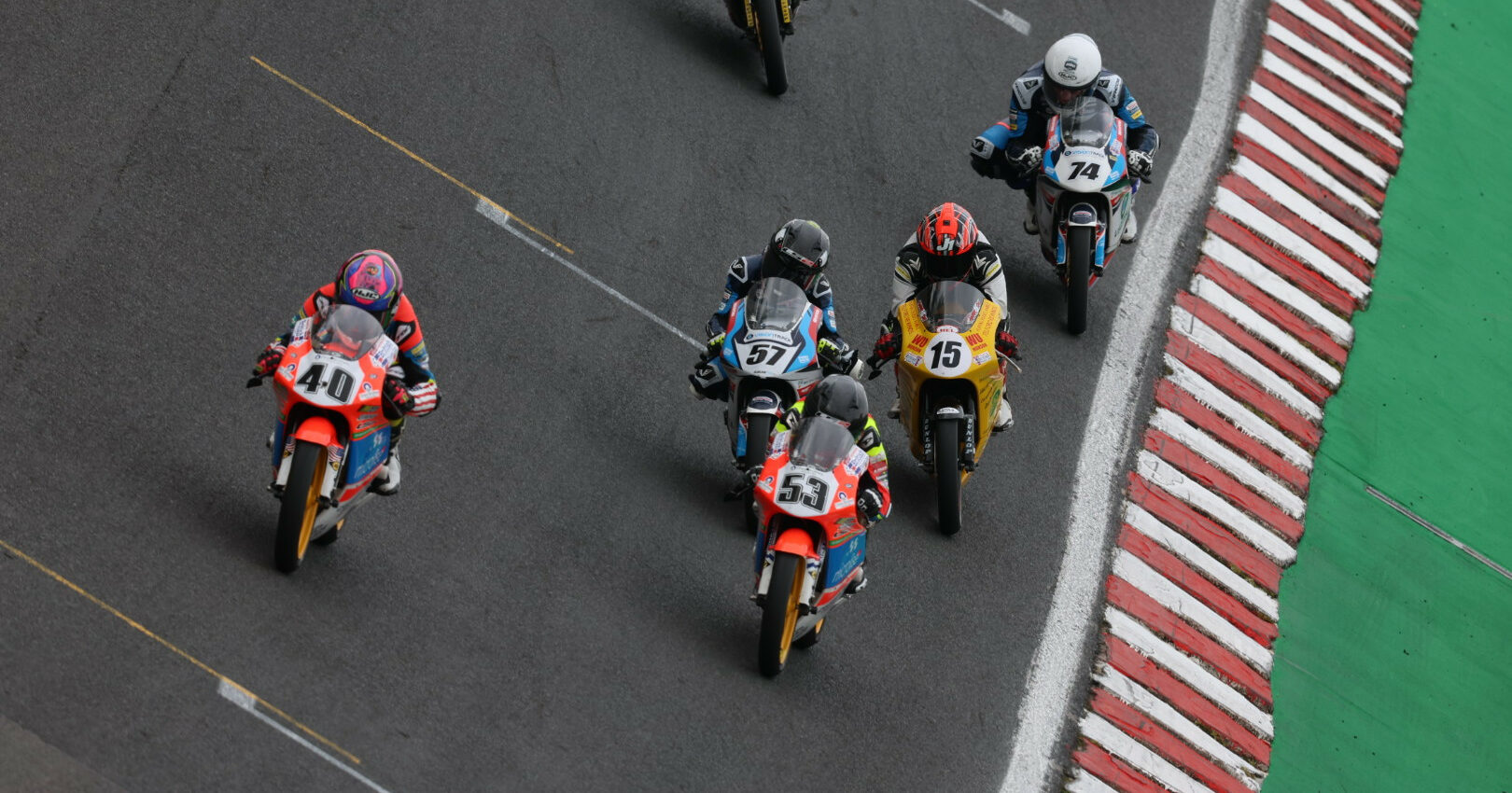 More, from a press release issued by British Talent Cup:

Johnny Garness (MLav VisionTrack Academy) just beat Kiyano Veijer (Microlise Cresswell Racing) to the top step in Race 1 at Oulton Park, with the battle going right down to the wire and decided by mere hundredths. Carter Brown (MLav VisionTrack Academy) completed the podium a few tenths back, with a late race of attrition for some on Sunday seeing key names crash out including former points leader Harrison Crosby (Banks Racing).

Off the line Veijer took the holeshot from Crosby, but the number 15 didn’t take long to hit the front. Brown was tucked in behind, with Garness in fourth on Lap 1. On Lap 2 the top two had a small gap too, but it didn’t last long and soon enough the duels and squabbles had become a group.

A nine rider lead freight train formed as the fight for victory started to heat up. Rhys Stephenson (Rocket Racing) was in the hunt but slight contact with Brown at the bottom of the hill saw the number 23 forced to run on, therefore losing time and dropping to the back of the group.

The lead was chopping and changing heading into the closing exchanges and after regrouping and reeling in the leaders, Stephenson then crashed at Turn 4 on the penultimate lap after running onto the grass. Eight riders were then left searching for victory, and it all came down to the last lap.

Veijer led the freight train from Garness and Julian Correa (Microlise Cresswell Racing), and at the bottom of the hill, the American was in hot and wide but had the inside line for the switchback. However, Garness then had the inside line for the right-hander and at that stage it looked like Veijer had enough of a gap for victory – but that didn’t turn out to be the case. Garness strung a sensational final sector together and a lunge up the inside at the final corner saw the number 57 edge ahead.

Garness and Veijer were side by side on the run to the line and by the slimmest of margins, the MLav VisionTrack rider held on for victory. Brown just snuck into third as Correa then suffered late heartbreak after he highsided at the final corner, but thankfully he was ok. Crosby, meanwhile, also felt that bad luck as the number 15 went down after running off to avoid the American.

That’s a wrap on a dramatic Sunday, with Veijer now in the points lead and more to come on Bank Holiday Monday. Don’t miss it!

The Fastest Electric Motorcycle In The World