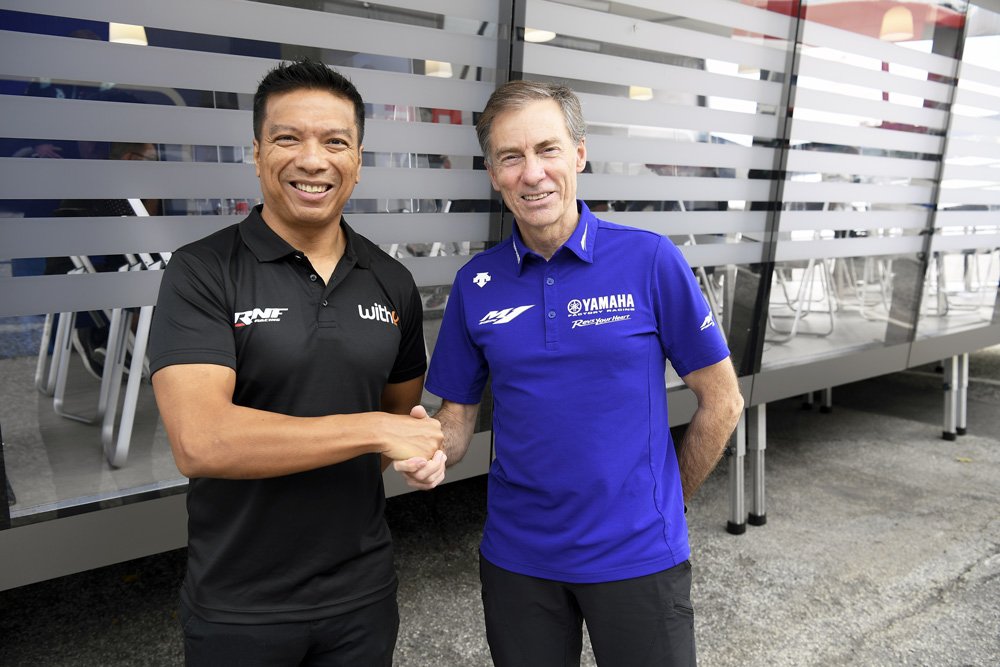 June is almost upon us and brings with it an important deadline: Yamaha’s renewal, or not, with the RNF WithU team which currently races with Andrea Dovizioso and Darryn Binder.

Born as a Junior team at the time of Petronas, and with success coming with the growth of Fabio Quartararo and Franco Morbidelli, the team ‘raced’ when it welcomed the forty-year-old Valentino Rossi, to whom the Iwata manufacturer had to find a place when it became necessary to get Quartararo into the first team.

Vale’s entry was an earthquake for Razlan Razali who had to make the best of a bad situation. Not only was Morbidelli on the rise supported with unsuitable material, but a clearly inadequately performing Rossi was added to this.

Petronas’ exit was the straw that broke the camel’s back and, after some misunderstanding with his right-hand man Stigefelt, Razali found himself with a team in pieces that had to fall back on two market discards: Andrea Dovizioso, because he was wanted by the sponsor WithU and Darryn Binder, promoted from Moto3 to MotoGP because he was already under contract and cost virtually nothing.

Let’s be clear: Dovi might have been a good choice but, undecided about retiring and after a half-season as an Aprilia tester, the rider from Forlì was attracted more than anything else by the supposedly easy-to-ride Yamaha. He expected to get on it and be at Quartararo’s level.

The reality was quite different: with Fabio running rampant today the M1 is being taken to its full potential by one single rider and of course no one is listening to the requests of the former three-time world championship runner-up.

So today Yamaha finds itself in the condition in which Ducati was several years ago: a winning bike, but only in the hands of one rider and a largely dissatisfied team. Franco Morbidelli, in fact, deprived of the support of Ramon Forcada, who switched to Dovizioso, is a shadow of his former self. And this transfer was Lin Jarvis’ worst mistake: an old crew chief, alongside a mature rider, each with their own beliefs, was not a combination that could ever work.

But Franco has a contract through 2023 and his stay with Yamaha is not currently under discussion. Instead, Razali’s team is the one at stake, and in fact the Malaysian manager has already entered into discussions with Aprilia, to have an alternative.

But what can Jarvis’ alternative be? There are two of them: a totally rebuilt WithU RFN team, or a new partner. The latter could be VR46, which however has a three-year contract with Ducati and two riders that he cannot / does not want / it is impossible for him to lose: Luca Marini, brother of Valentino Rossi and Marco Bezzecchi, a promising rookie in MotoGP.

On the other hand, VR46’s economic interests would lead to Yamaha, which could be interested in Bezzecchi, less so in Marini. Jarvis, on the other hand, likes Celestino Vietti, while at the same time he has to withstand the pressure of Toprak Razgatlioglu who will probably test the Yamaha M1 in June given his desire to move to MotoGP. The problem is that for him there is no place in the factory team.

The situation is not easy for the management of VR46, married to Ducati which, however, has three other teams. On the other hand, unless it is decided to let him stay in Moto2, Vietti could be the right solution to offer the RNF team the chance to remain, given that Celestino would certainly be appreciated by the Italian sponsor. And for the second rider all things considered on his debut Darryn Binder is not going so badly.

So it’s all OK then? Not at all: on top of this situation, already complex and complicated in itself, has arrived the Exocet missile of Suzuki’s retirement, which has left two riders of the calibre of Joan Mir and Alex Rins on the market. Both are looking for a factory seat but there are few places available. In fact, there is a Yamaha free, Dovi’s, probably Pol Espargarò’s Honda and one, perhaps two Aprilias, that of Vinales who is not yet confirmed unlike Aleix Espargarò who it seems it will be difficult to see leaving.

Aprilia, in addition to Maverick’s, could also have a third RS-GP for a (feasible) future Junior team, but at the moment Romano Albesiano’s creature is in the same condition as the Yamaha M1: only one rider is able to ride it.

And so? While a competitive season pans out that at the moment has not yet offered a serious antagonist to Fabio Quartararo, but instead many rivals, some more credible others less so, Yamaha and Lin Jarvis are faced with an epochal choice: renew (with RNF) or explore other roads?

Actually the ball is between Razlan Razali’s feet, because the current line-up of his team has zero chance of being reconfirmed as it is. On the other hand, the only move Jarvis could make to keep the team up is to secure Vietti and perhaps offer space to Rins or Toprak (with an official bike). The only other Italian available is Arbolino, who however has a two-year contract in Moto2, as well as Celestino, who would prefer another year in the category before moving on to MotoGP.

Gone are the days when Lin Jarvis had two ‘mean’ and winning riders in his team: Valentino Rossi and Jorge Lorenzo.

All this is on standby while the paddock awaits the official announcement of Suzuki’s withdrawal, not yet formalized. Another nice problem to unravel because Carmelo Ezpeleta won’t swallow this bitter pill so easily.

La Vita in Verde: An Aermacchi 250 restomod from Austria