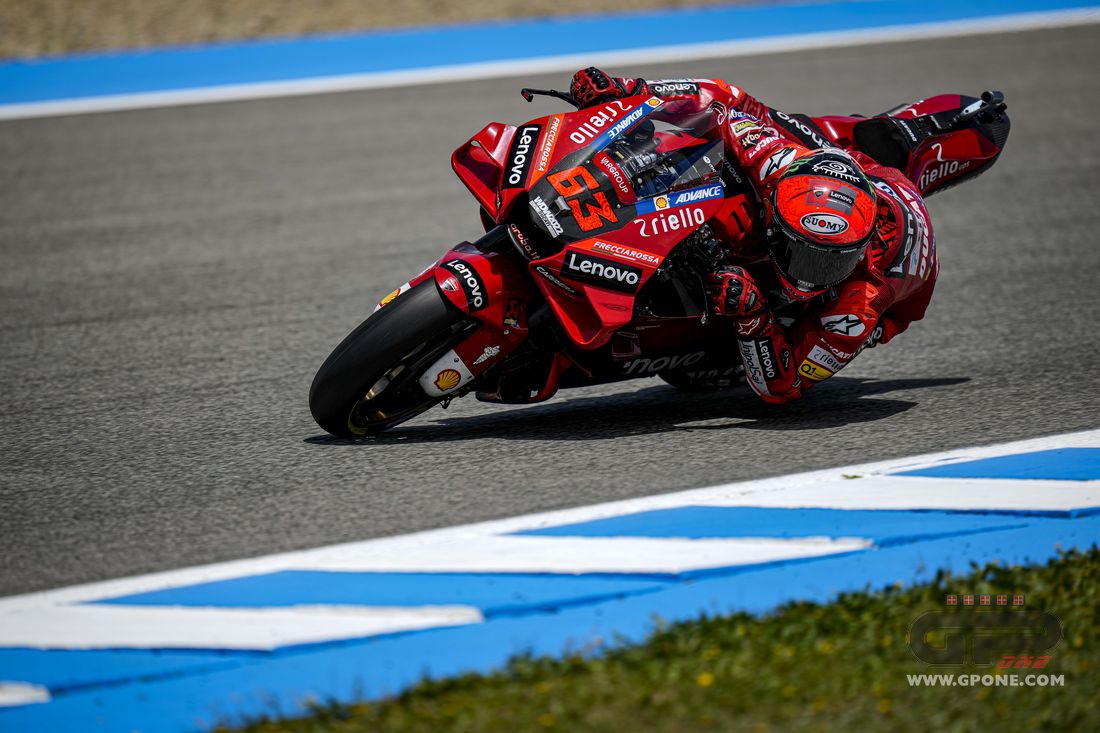 The third place at the end of Friday in Jerez is the best news that Pecco Bagnaia could have hoped to receive. He had arrived in Spain with a right shoulder that worried him and, even if his fears have not disappeared, now he knows that he can ride his Ducati without too many problems. Not just for a lap, but also over distance, showing a steady and fast pace.

“My condition is better than at Portimao, fortunately. Even if this track is tough, there are many changes of direction from left to right and they bother me – he told us about his day – At the moment they have not limited me too much in riding, but it could happen when I have to go faster. Today I really struggled only in FP2, in the flying lap: at the exit of turn 4 the bike shook and it hurt me. It is still a manageable pain, it does not limit me in riding, and I felt good on the bike right away, despite the fact that this morning a small mechanical problem bothered me, it did not allow me to brake hard. In FP2 everything worked perfectly, I rode well with used tires and I did two good time attacks, it was a good day ”.

Now we have to hope that his physical condition continues to improve.

“This morning I did not take any painkillers to check my condition, while in the afternoon a fairly light anti-inflammatory, in the race I will have to use something stronger – explained Pecco – I made a work plan with the Mobile Clinic and with Carlo (Casabianca , the preparer of VR46, ed.) and I think it’s working “.

On the track it (finally) seemed as if we were seeing the same Bagnaia as at the end of last year.

“For sure the Portimao race helped me to get back the confidence in the bike and I finally felt as if I was riding like last year, braking hard, carrying a lot of corner speed and being able to be consistent with used tires. All our work is starting to bear fruit” he smiled.

But that doesn’t mean that his season starts now…

“The championship started in the first race, we worked hard and we have always improved, up to Portimao – he continued – There I knew I could be fast, it went the way it went, but it helped me a lot to find the sensations I needed and today I proved it. In my opinion tomorrow it will get better and better ”.

The GP22, however, seems to have already reached the level of last year’s bike.

“It’s difficult to say, because the last time I rode at Jerez it was with this bike – underlined Pecco – First I looked at last year’s telemetry, in FP2 I rode with the same time, but there are a few differences. In straight-line braking it seems that the GP21 is even better, perhaps also due to the fact that the fairing was larger, but in cornering and corner entry phases I am faster now. They are two different ways of riding a bit, but we are figuring out how to get the best out of the new bike. “

The important thing was to start well.

“It was essential, I needed a first day like this – he sighed – The conditions were perfect, it is difficult for there to be no wind in Jerez and this makes things easier for us. Now I can focus more on myself and my work. I’m still trying to give today’s performance the importance it deserves, because it’s only the first day. I felt good, but let’s wait until tomorrow, in my opinion the track will improve even more “.

Who will your rivals be?

“I still find it difficult to say. Today Fabio did a good second run, but I managed to improve in the third. Certainly Yamaha and Suzuki are going very strong at the moment,” was his reply before saying goodbye.