Home MOTO GP MotoGP, Charte: “There will be no more miraculous returns, there are no... 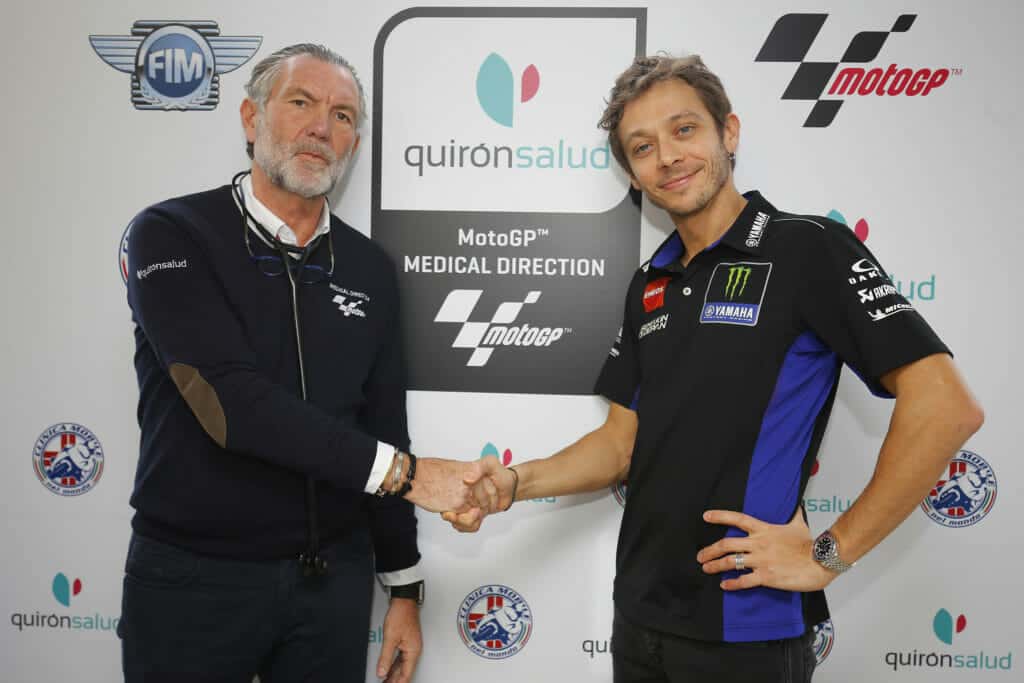 Dr. Angel Charte is the new guardian angel of riders, the new Dr. Costa, in short. But he is very different from the man who created the first Clinica Mobile. Time passes, medicine improves and the ways of approaching a dangerous sport such as motorcycling also change.

The main difference between Charte and Claudio Costa is that the latter was born in the period of heroic motorcycling: that of riders who raced with broken collarbones and hands. Or worse. For Costa, the overriding imperative was to get the rider back on the bike as soon as possible, responding to his requests. Charte thinks differently, we believe also because of the media pressure that is generated after the most serious accidents.

We have the chance to get to know Charte a bit in a very long interview with Mela Chercoles in AS, summarized here, in which he tackles many issues. And it is speaking of recent events, such as the accidents of Lorenzo and Marquez, that his philosophy emerges.

“After the latest serious accidents we have had, including Marc Marquez’s, I met the FIM Director General and Dr. David MacMagnus (head of the FIM Medical Commission, ed.), and I told him we had to change, and he listened to me. I asked him to do more tests on the riders when they come back from a serious injury and that it’s not enough to make them do four moves that lead nowhere. We have neurosurgeons, ophthalmologists and traumatologists, all consultants on our side. Even if the rider brings us the reports of his specialist, it is still up to us to consult our consultants and decide whether or not he is fit to take to the track “.

It seems that the consequence is that there will be no more miraculously short returns.

“No, neither like Marquez’s at Jerez nor Lorenzo’s at Assen. After Lorenzo at Assen in 2013, a more rigorous protocol was already in place ”.

However, Marquez was allowed to come back at Jerez only four rounds after surgery on his right humerus.

“Marquez is a special case that made rivers of ink flow everywhere. Everyone had an opinion about it. When Marquez returned after his first operation, he was in perfect shape. The reports we received were correct, and when he got on the bike, he went fast. The time for prudence had passed according to the medical code, the tests had been done and Marquez was deemed fit because he passed all the tests. It is very easy to talk after the event. We are changing the medical code and are now more demanding. Then what happened, happened. But now he is going quite well and the last checks he did with an excellent traumatologist, Dr. Antuña, seem to be going well ”.

“Marquez is a complicated and difficult subject because he is a personality. The pressure increases a lot for the doctor and then everyone feels compelled to have their say. With Marquez’s latest diplopia, I heard ophthalmologists who didn’t see him give their opinion and it became something of a circus. I don’t think it’s ethical, because I never give my opinion on pathologies I don’t treat. Marquez knows what he has and knows the risks he takes. His ophthalmologist explained it to him perfectly and he is a professional. What he has does not mean that if he crashes he will have diplopia again. It could happen to him now, in ten years or never ”.

Do you support the theory that motorcycle racers are a different breed of sportsmen?

“No, no. Riders are human. What happens is that they are well prepared from an early age and also know how to crash. Remember how Maverick crashed last year in Austria, and got up like nothing had happened? What is very important for riders, who are scared like you and me, is that they manage their fear perfectly. They always know how much to risk and how to risk. There are no madmen here, no madmen ”.