Home MOTO GP MotoGP, Quartararo: “I wasn’t able to reach my strong point on the... 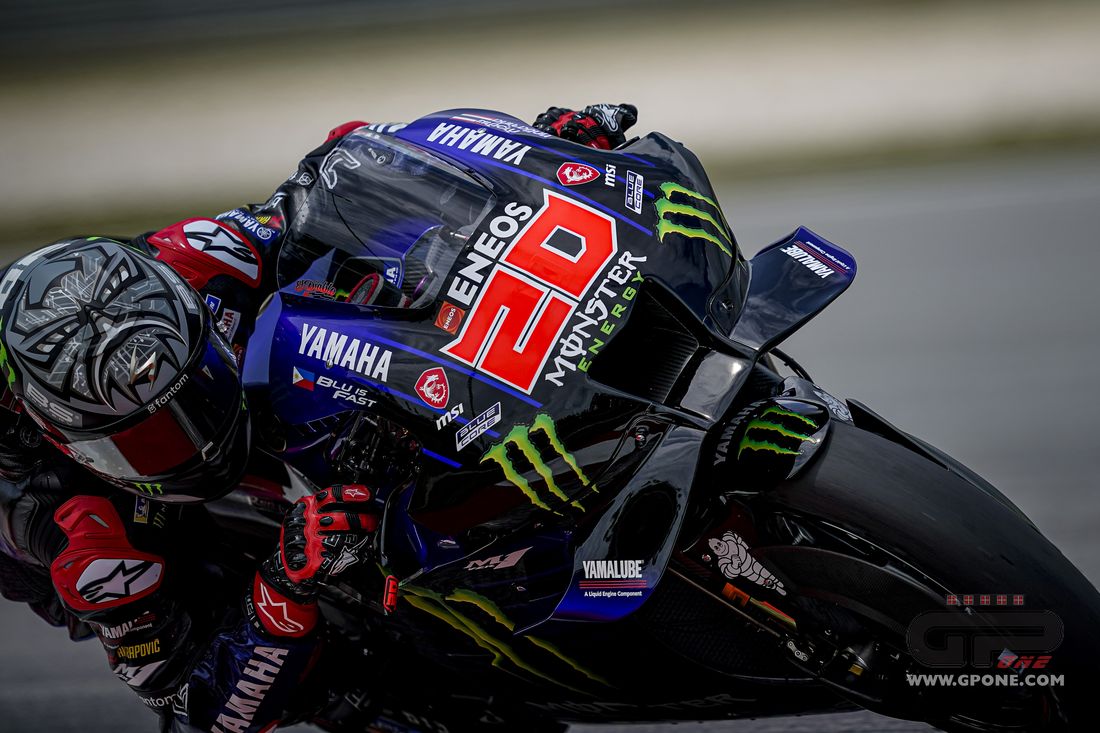 “After three years with the same aerodynamics, it was time for something new.” Fabio Quartararo was satisfied and, in the afternoon, the Yamaha got new wings. Their shape is very similar to the previous ones, but the two spoilers are now larger and stick out beyond the edge of the windscreen.

However, the world champion still has no opinion. “They’re neither better nor worse,” he  explained. “Sepang isn’t the best track to test this new aerodynamics, because it makes the top speed a bit worse but reduces the tendency to rear up. We should try it on a track like Jerez to  get more answers. I don’t know if Mandalika will be suitable.” Franco Morbidelli is instead more optimistic about the benefits. “I like them,” he stated. “They improve acceleration and don’t make the top speed worse. That’s what I wanted, and Yamaha did a good job.“

Both riders were able to work on the M1 2022 today and start getting a feel for the bike they’ll be using next year. One of the goals was to find more power.

“We now have the same horsepower as the Ducati,” he said jokingly. “Honestly, it’s hard to tell,” he continued. “I didn’t have good sensations on the bike today. I couldn’t ride well, even when I did the time attack. The engine looks very similar to last year’s to me. We’ll try something new for the electronics tomorrow, but I don’t think we’re going to make much progress.”

Fabio ended the day with the 6th  fastest time, just over 3 tenths from the best, but he’s not satisfied with his performance.

“I wasn’t able to ride in my own style for the first time,” he explained. “I was riding with a medium rear tire that had twenty-six laps. I mounted the soft, and it improved a bit, but I couldn’t take advantage of my strength, my cornering speed. It also have to say that, to go really fast on this track, you have to really reach the limit in some places, and it wasn’t the right day to do that.  I’m happy with my pace. I lapped in two minutes flat with a tire that had twenty laps, but I struggled in the flying lap.”

Morbidelli also had the same problems, but the most important thing for him was to check his physical condition and, at the end of the day, he  was able to ” breathe a sigh of relief,” he said. “I had to deal with a complicated injury, which I had underestimated. I didn’t expect it to take so long to recover. I had to learn certain movements over again. But I immediately felt better today than last year. My leg still doesn’t behave like the other, but it’ll be fine for Qatar.“

Once the physical assessment was over, he assessed the technical aspect.

“I generally think the M1 has improved,”  Franco said. “This was a complicated and interesting day, because I had a good pace, but I struggled in the flying lap.”

A 21st place in the standings proves that, but there might be an explanation.

“This is just the first day, and I started with the set-up I had used last year when I was riding strange because of my leg,”  he explained. “I was in trouble this afternoon, so I returned to a more normal set-up, using it as a foundation to work on. I want to try to be faster tomorrow with the new tires, working on the set-up.“