Ultraviolette Unveils One Of The Most Awaited Electric Sportbikes 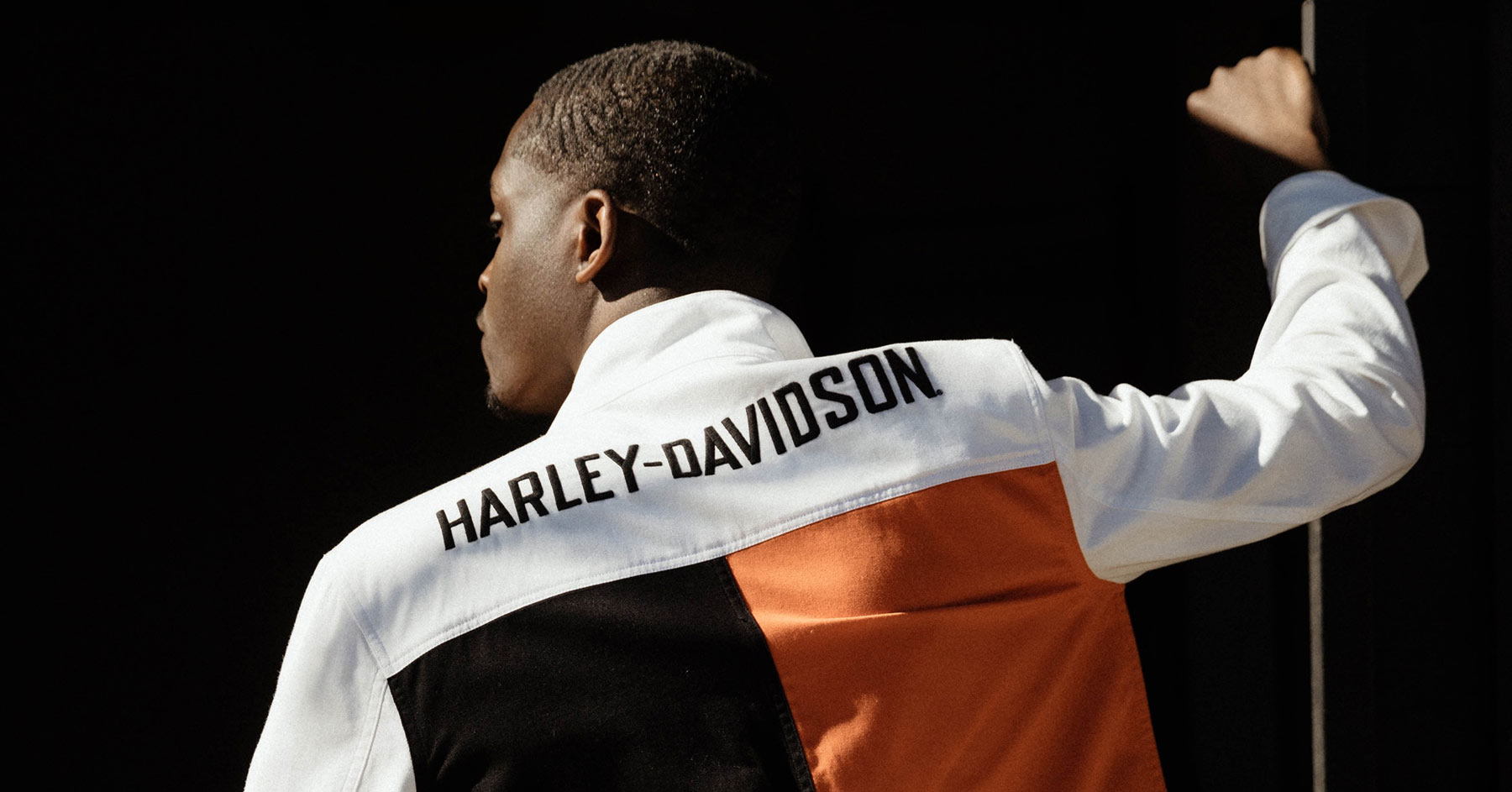 
A Suzuki Bandit rescued in the Czech Republic, an immaculate Honda CT70H going under the hammer, and a wonderful Vincent discovery. Plus significant news on the Harley-Davidson apparel front, with Milwaukee’s first outsider collaboration in 119 years. 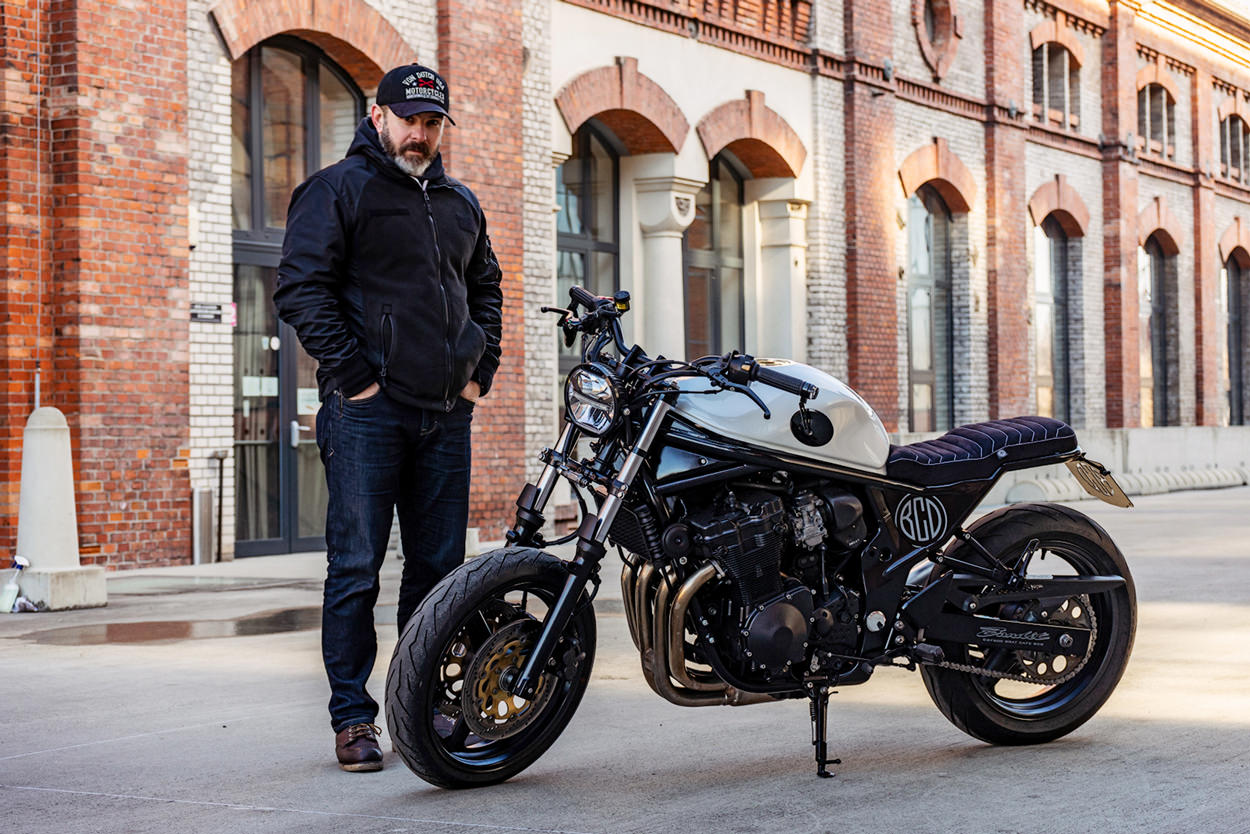 Suzuki GSF600 by Blackout Custom Design The Suzuki Bandit 600 is one of those solid, reliable roadsters that will keep going forever—if looked after properly. Unfortunately, this one wasn’t. The bodywork and frame were damaged and, worse, it’d been sitting outside in the rain and snow for a couple of years, slowly rusting away. 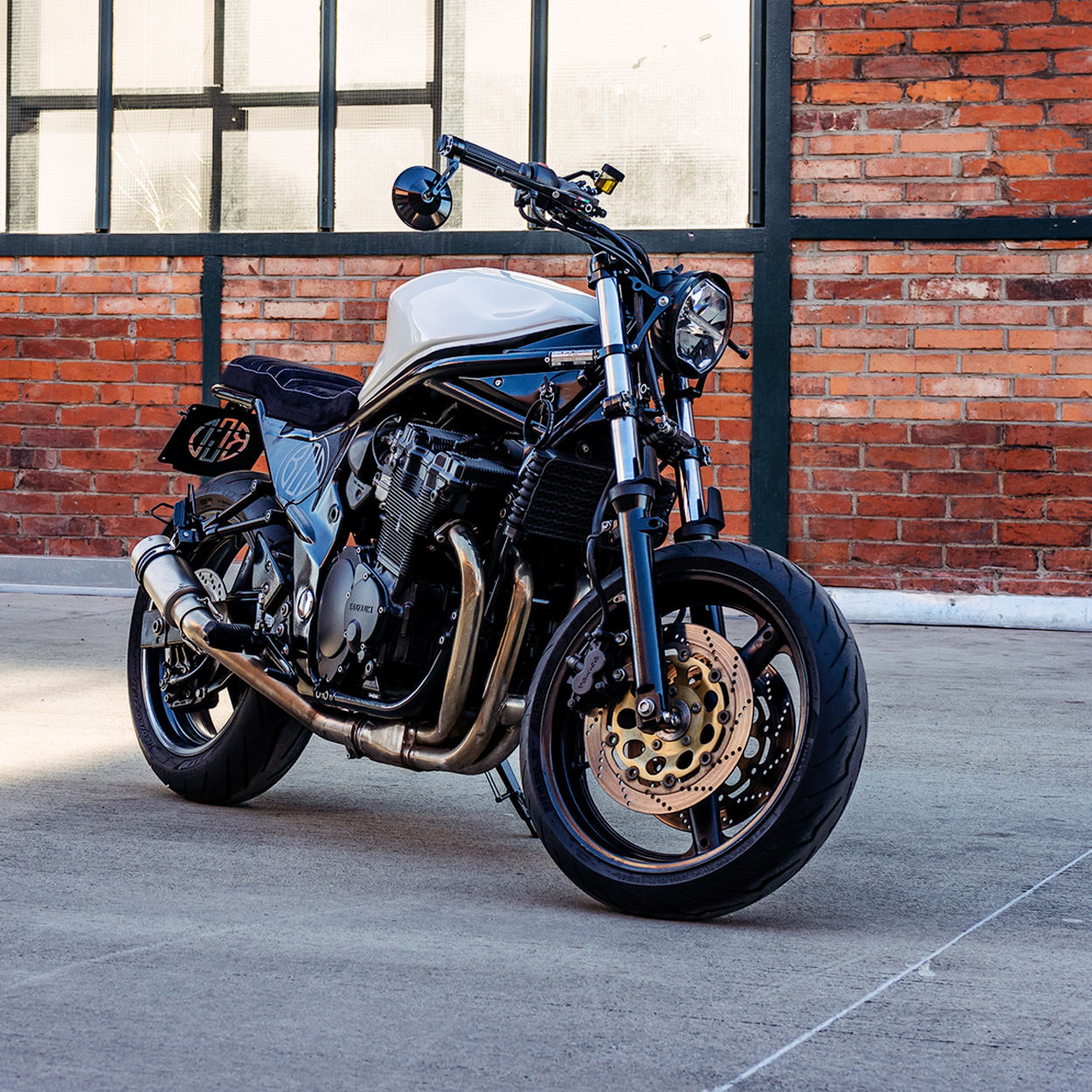 Most folks would have loaded the bike onto a trailer and taken it to the local wreckers, but the owner of this Czech machine decided to right the wrongs instead.

He took the Suzuki to Marcel Galuszka of Blackout Custom Design [above] and asked him to make a café racer with room for a pillion passenger. Along the way, the style meandered more into what Galuszka calls ‘brat tracker’ territory, but it shows how relatively few mods can transform the vibe of a bike. 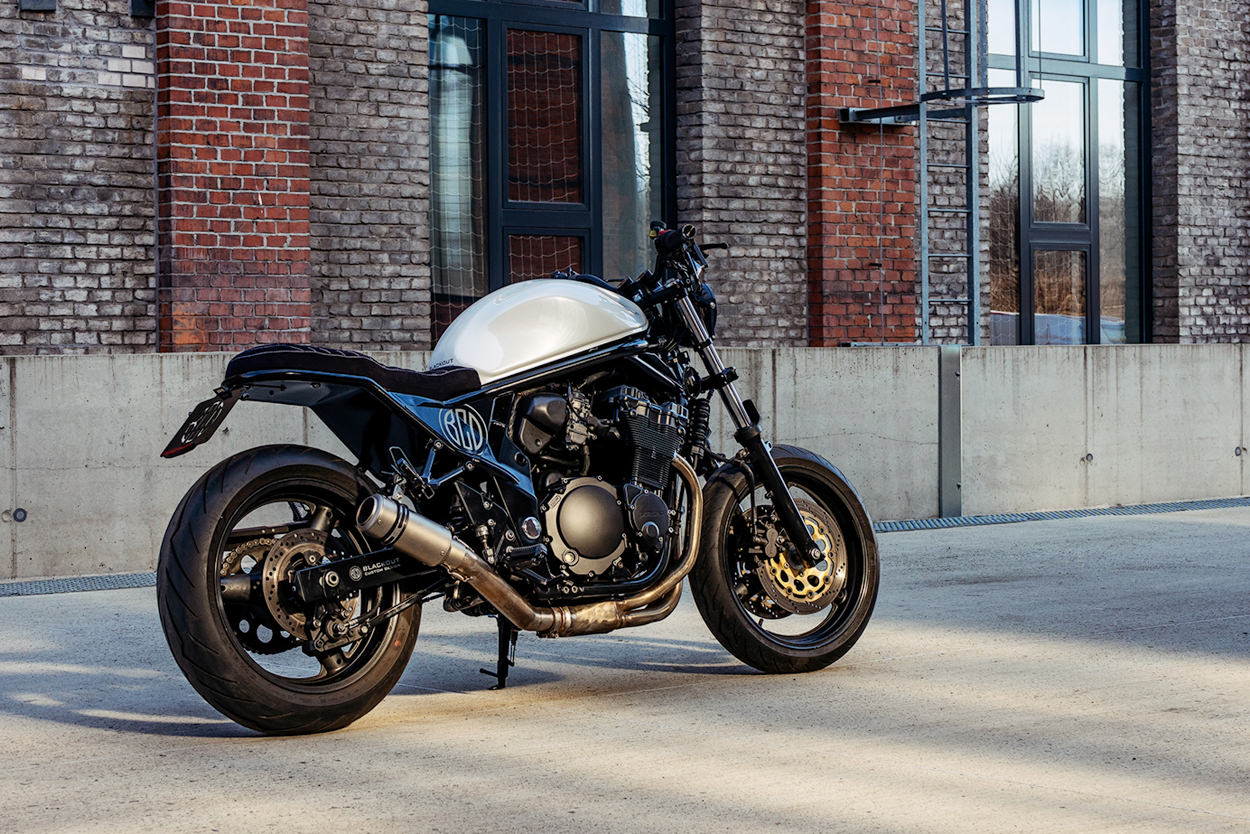 Galuszka fixed the bent frame, built a new rear section, and repaired and remodeled the tank. The new stepped seat is commodious yet unobtrusive, and much more attractive than the massive unit on the stock Bandit.

On the electrical front, there’s LED lighting all round—including a sharp new headlight—plus a neat Motogadget speedo. The electrics are all tucked neatly away under the seat, concealed with simple side panels. 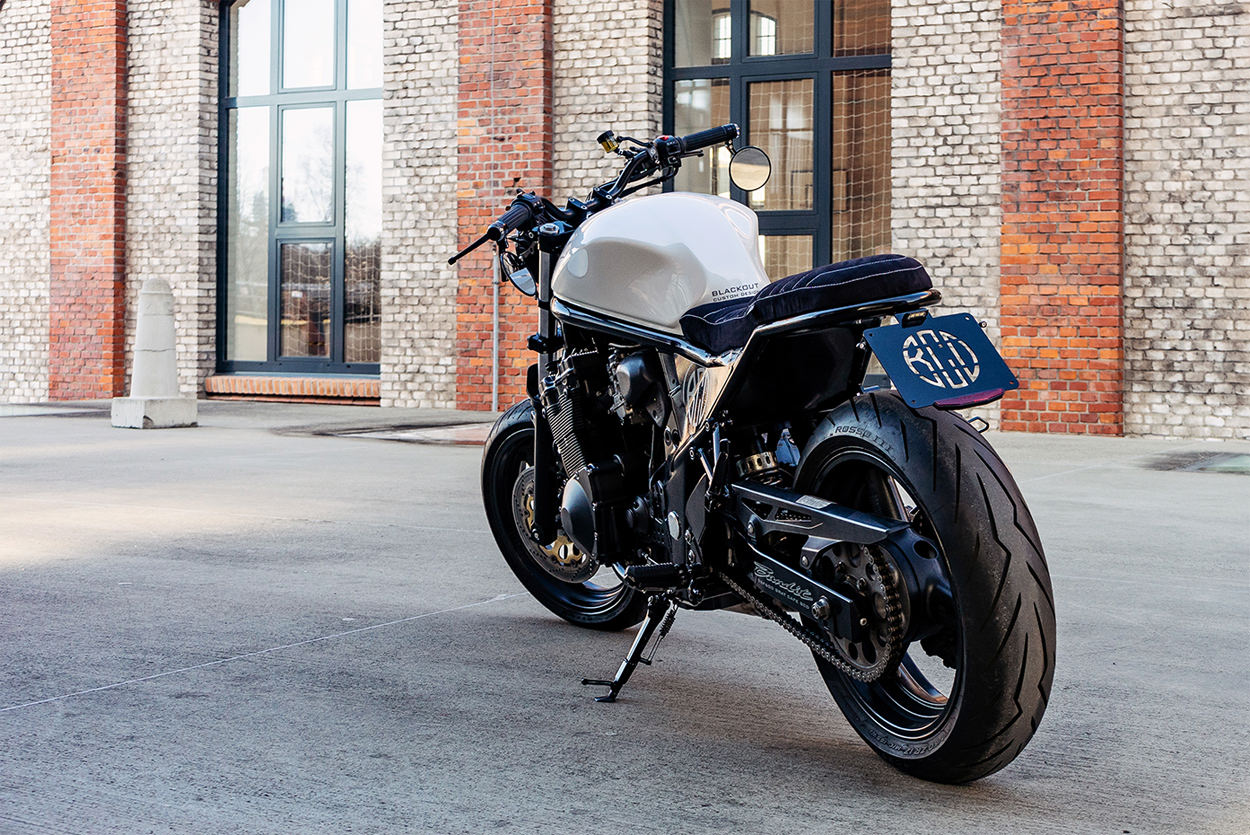 The rest of the bike was restored and refreshed, with extensive powdercoating, and subtle updates are scattered throughout. Excellent work on a donor bike with notoriously ‘difficult’ styling and in very dubious condition. [Via] 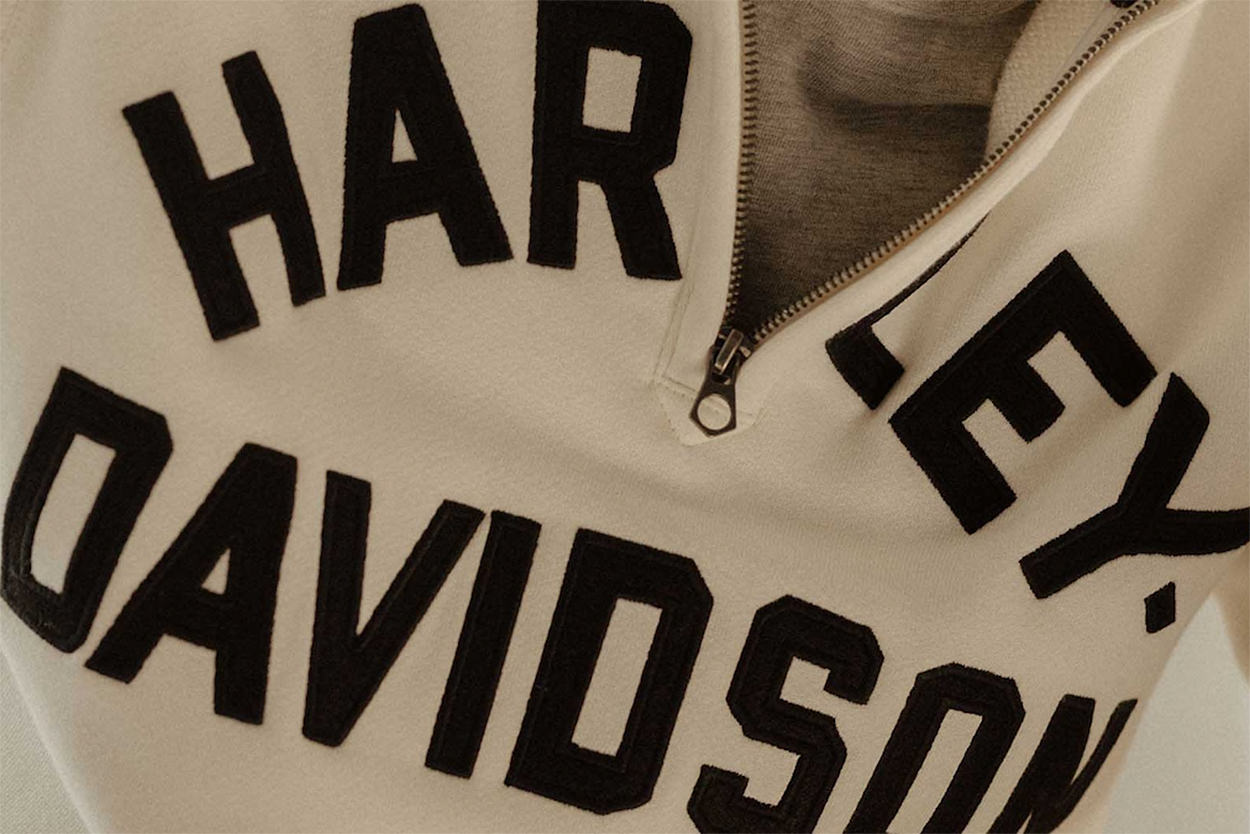 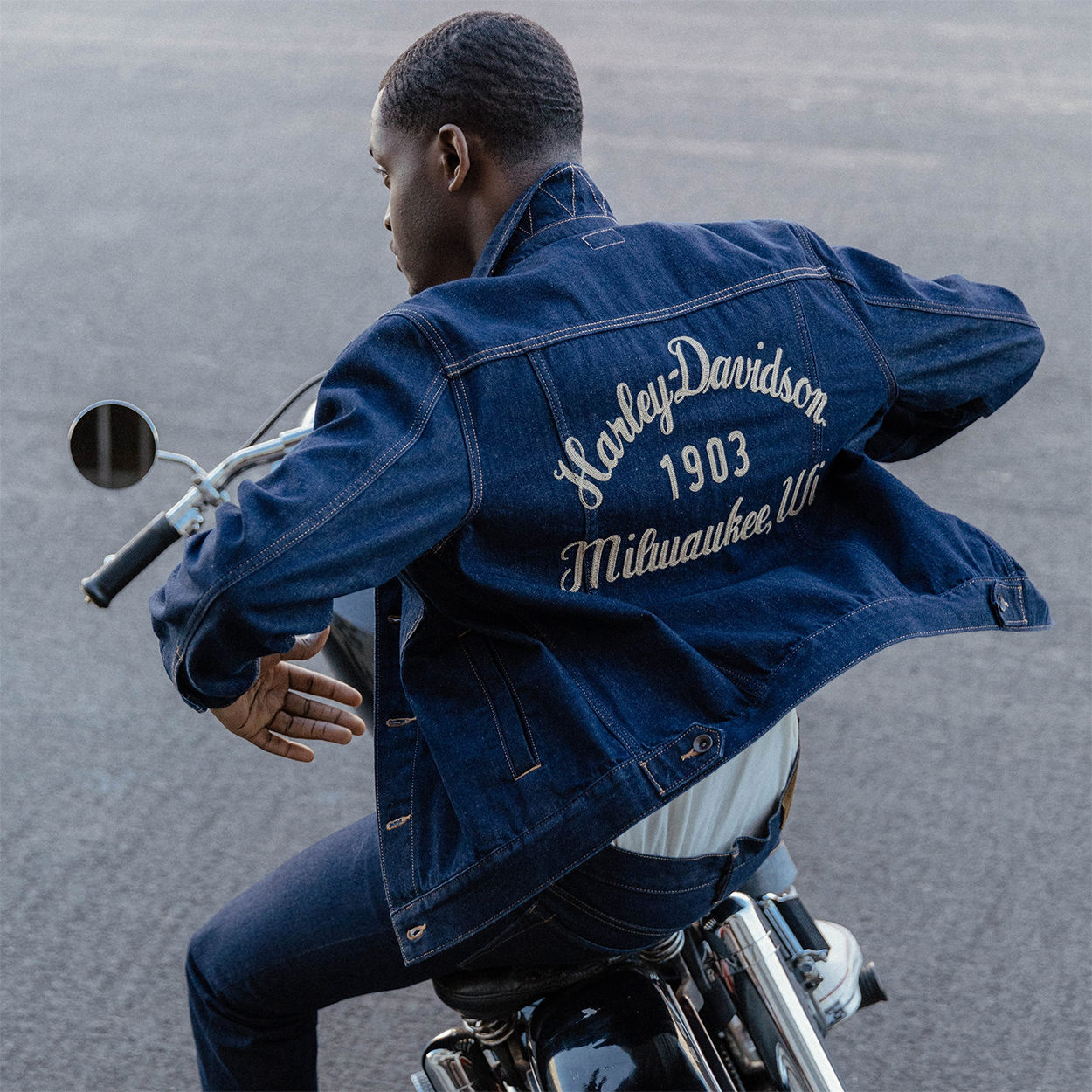 ‘General Merchandise’ is one of Harley’s most profitable divisions, with reportedly even bigger margins than accessories and hard parts. And now, for the first time in the company’s 119-year history, Milwaukee has partnered with an outside designer for a clothing range.

Harley-branded clothing has always been ubiquitous, but rarely fashionable. And not all fans of the bar and shield want to look like they’ve spent a week at Sturgis, or wear a ‘turtlezip’ sweater with giant stripes. 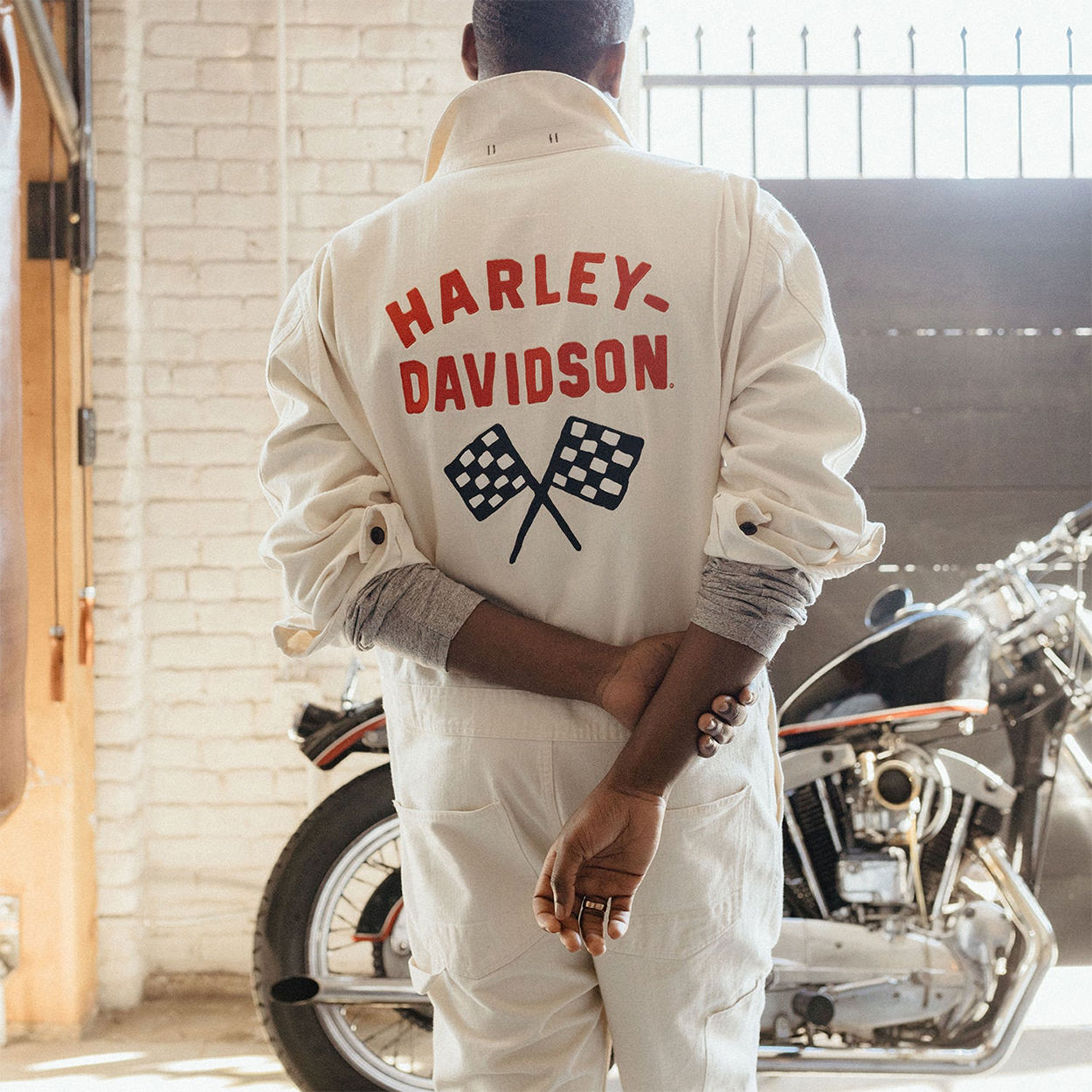 The designer tasked with bringing Harley’s satorial image into the 21st century is New York-based Todd Snyder, and his first release looks pretty crisp. Champion is the manufacturing partner, so quality should be good.

Why did Harley chose Snyder? Maybe it’s because his angle is ‘reinventing the classics,’ and he has a particular rapport with men in their 30s and 40s. He’s also known for successful collaborations.

As you’d expect, the collection leans heavily on heritage. The most expensive item is a set of coveralls at $498, which is pretty reasonable considering the cost of some high-end moto themed gear. Browse the collection here. 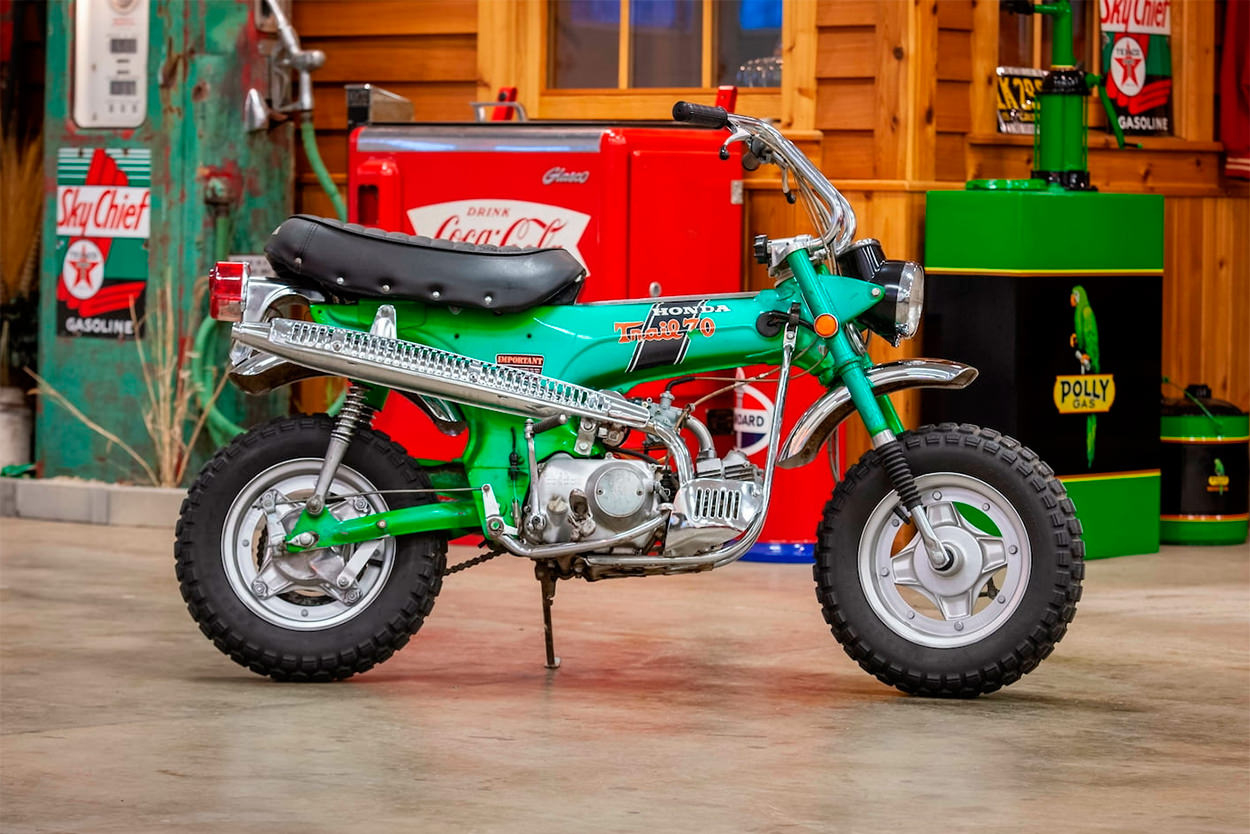 1970 Honda CT70H from the Iowa Collection Next month, Mecum is set to hold an auction of around 100 motorcycles at its Glendale, Arizona event. The centerpiece is the ‘Iowa Collection,’ a shipment of 19 bikes owned by Larry and Tim Molzen.

There are some truly fantastic machines in this collection, and most are in as-new condition with very low mileage. 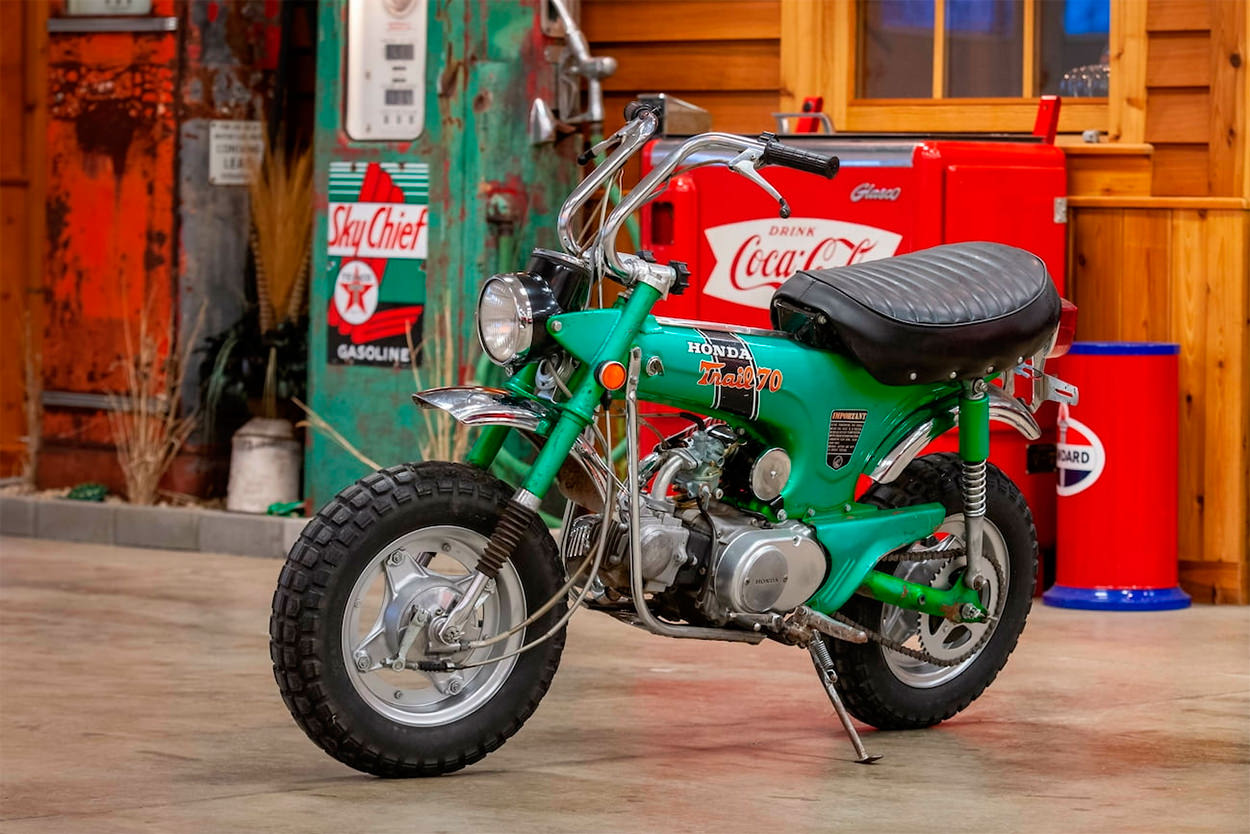 This little CT70H caught our eye: finished in the rare Candy Emerald Green color, it is unrestored and has just 896 miles on the clock.

According to Mecum, the CT70H was “a small and agile trail-hopper that rose to popularity in the early 1970s for its compact design and efficiency … successfully marketed to tribes who preferred the RV and camping lifestyle.” 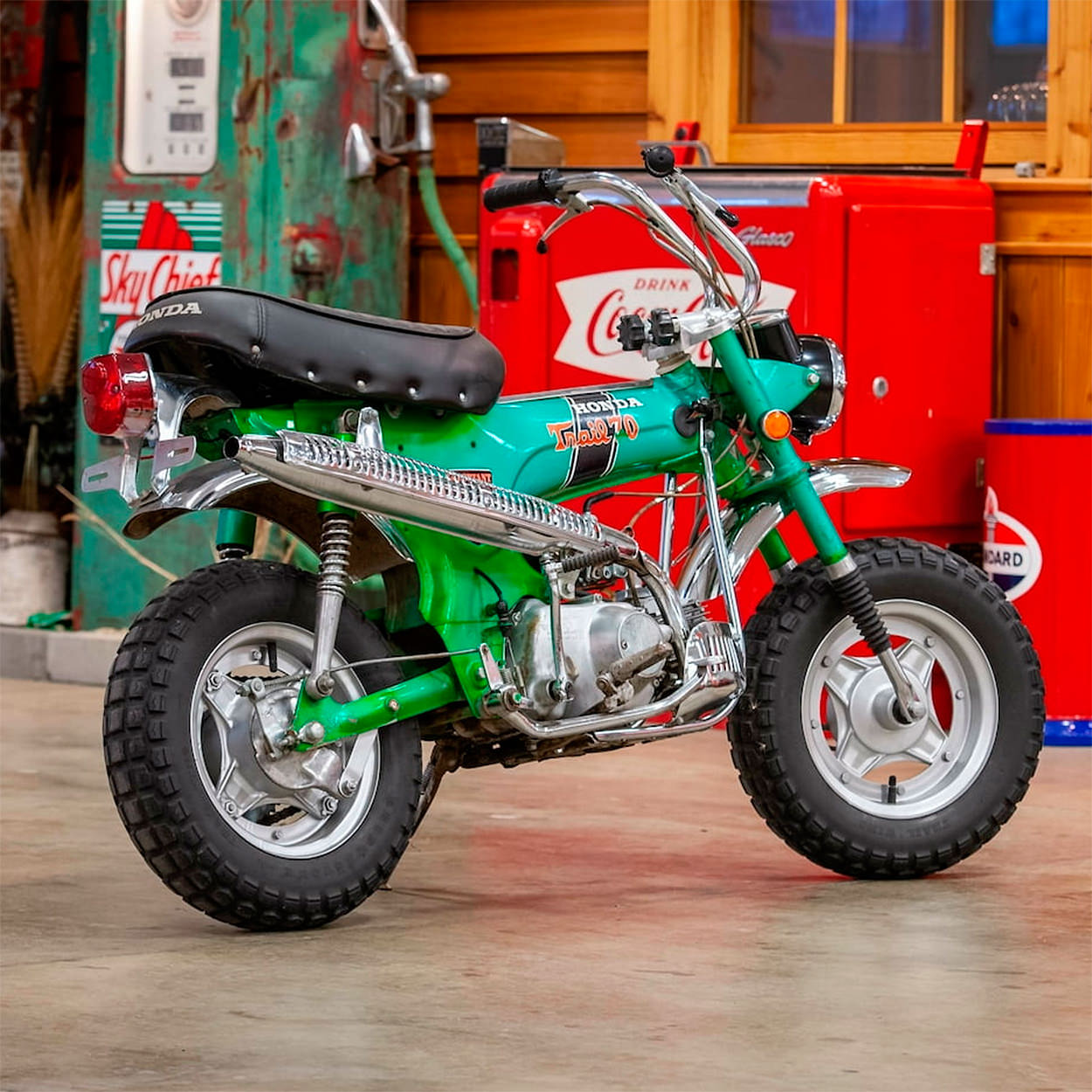 This is a 1970 model, so it has a four-speed manual gearbox rather than a three-speed semi-automatic. It also has fold-down handlebars and carrying handles built into the frame, making it easy to stow in the trunk of a car.

The collection has a strong emphasis on classic, trail-ready Hondas that will be especially familiar to our American readers, but there are some oddities in there too—such as a 1971 Sachs 125 Scrambler and a 1968 Rupp TT500 mini moto. Interested bidders can find more information here. 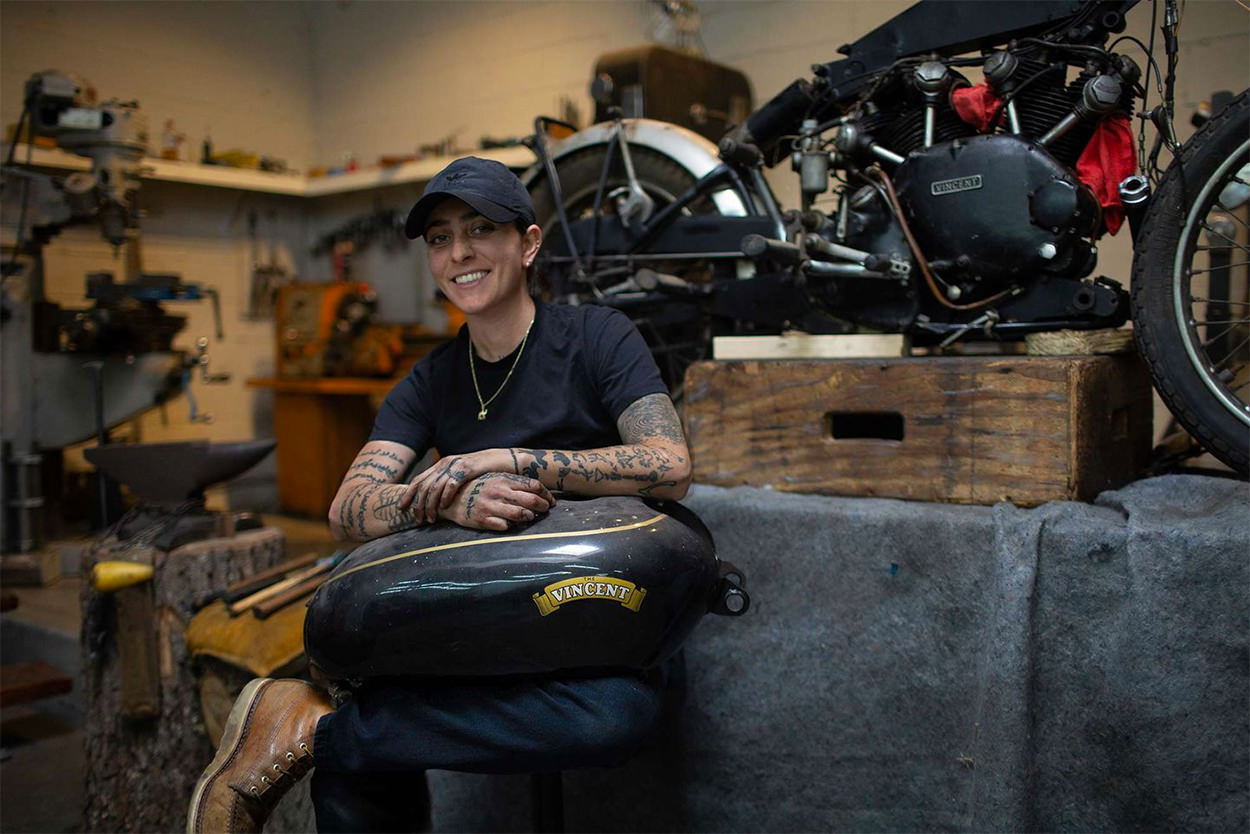 J. Shia finds a 1951 Vincent Black Shadow We love the stories behind bikes as much as the machines themselves. And stories don’t get much better than this one.

The multi-talented J. Shia runs Madhouse Motors, a Boston shop that specializes in motorcycle restoration, maintenance, and occasionally customization. She’s well known in the Massachusetts area, and in wider custom circles, for the quality of work coming out of Madhouse. 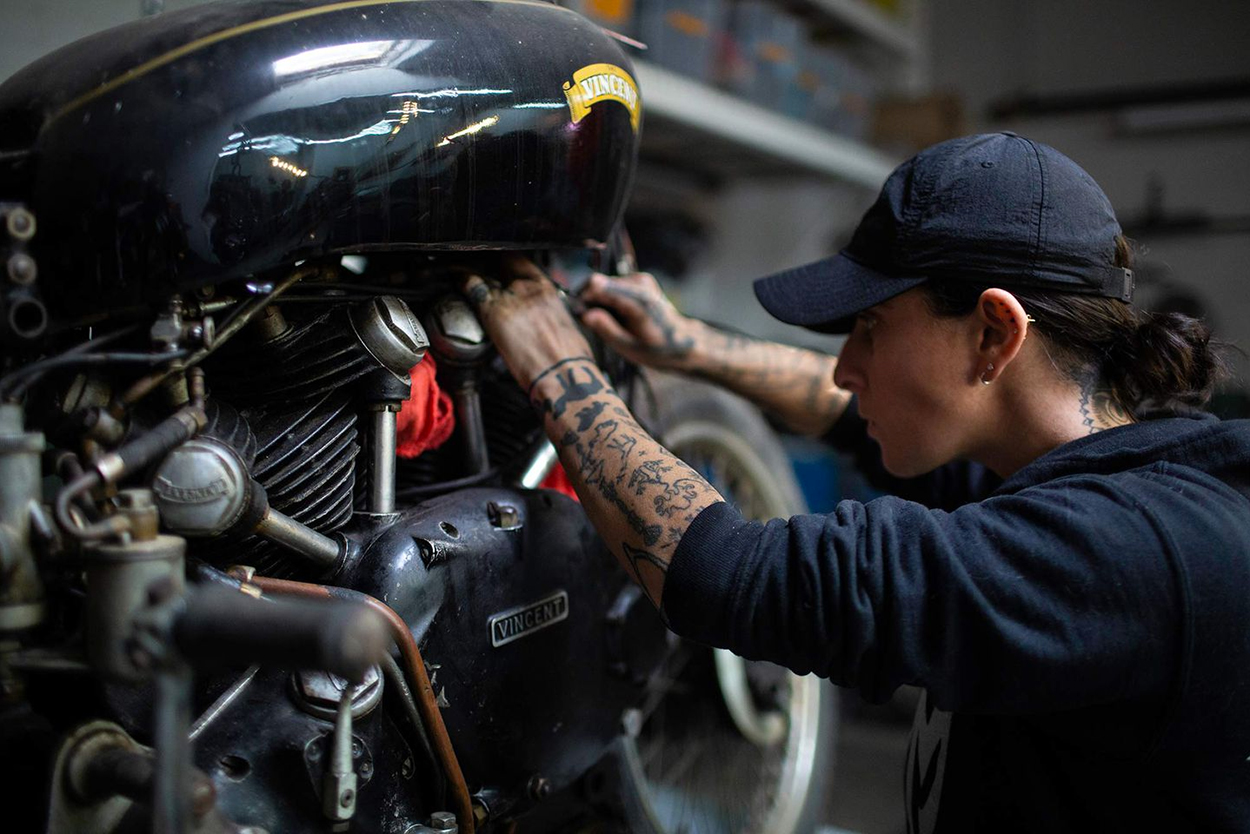 A few months ago, J. Shia was contacted by an older lady called Ruthie, whose husband Bill had passed away. Bill had amassed a superb collection of machines, some in need of restoration or repair, and it became J. Shia’s job to catalog the garage, cost up repairs, and present the collection for sale.

In the midst of all this, J. Shia spotted something on a shelf, hidden by an old t-shirt. 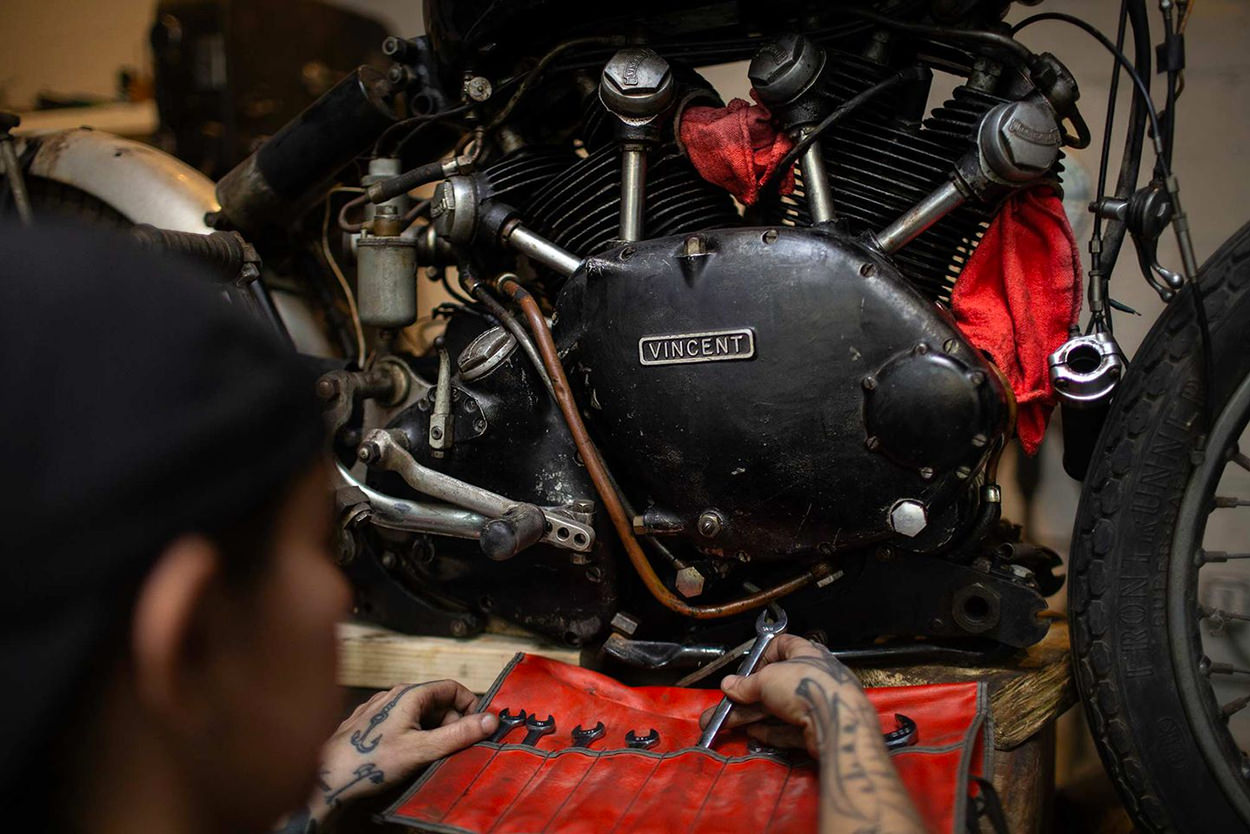 “I walked over, lifted up the shirt, and saw none other than the iconic black and yellow Vincent ribbon on a dusty black tank. I stared at it for a moment, then turned and asked Ruthie if she knew how or why that tank was there.”

“She shrugged and admitted that she wasn’t sure, but that maybe it was for one of the junk bikes Bill had in the basement.”

Deal of the Week: Choose Summer time Using Gloves Over 40% Off