Home MOTOCROSS WorldSBK: Bautista Says, “I Hope To Have The Same Battle As Aragon”... 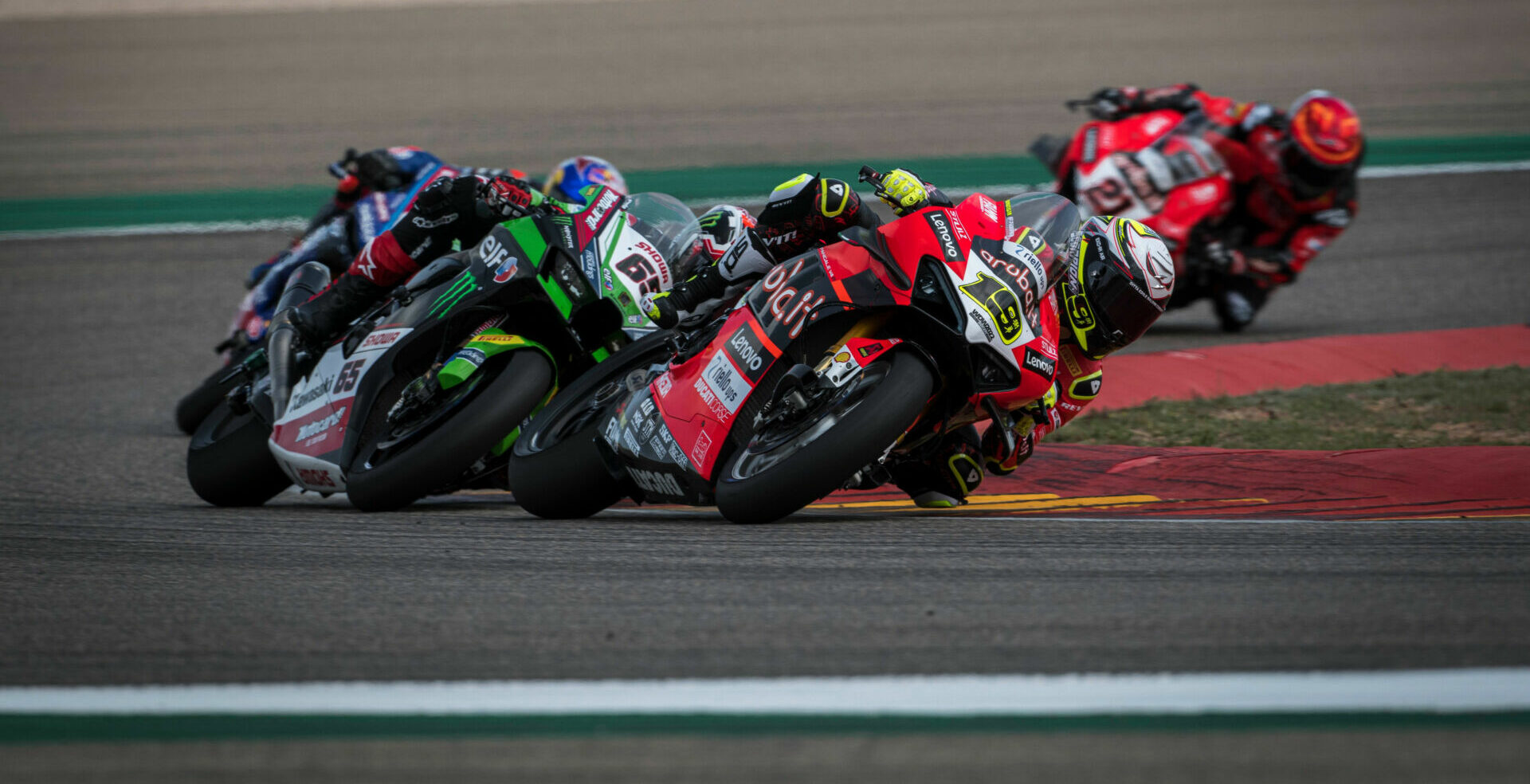 
Talking tough ahead of Assen: “I hope to have the same battles… that’d be incredible”

The heavy-hitting names speak about the upcoming Assen clash, with rivalries, debates about upgrades and hoping to bounce back all on the agenda

The 2022 MOTUL FIM Superbike World Championship arrives in the Netherlands for the Motul Dutch Round at the TT Circuit Assen. Celebrating 30 years since the first time WorldSBK visited the hallowed turf of the Dutch venue, it promises to be a spectacular weekend.

Alvaro Bautista (Aruba.it Racing – Ducati): “I hope to have the same battle as Aragon!”

“It’s not easy to beat Jonny here. He has won everything here apart from three years ago against me. More than motivated, I am confident; I felt very strong during the first round so why can’t I be strong here? It will be more difficult to beat him here as he is the ‘King of Assen’ but it will be a good challenge for everyone to beat him. Jonny, Toprak and I are three very different riders, and we have three very different bikes, so each one has its own style. It’s good to have three contenders for victory but also my teammate Michael Ruben Rinaldi; he can battle with the other guys but also achieve a podium which he deserves. I hope to have the same battle as Aragon!”

“Let’s say Alvaro’s replaced the missing Scott Redding at the front. It’s always cool to have more guys fighting at the front. We didn’t mention Rinaldi, he was very strong at Aragon, a good circuit for him. Nice to be in the battle, nice that I had a bike that let me fight as well. Look forward to more of that here. To win 100 races with Kawasaki would be incredible! No one’s mentioned that inside the team. To win two races in WorldSBK is tough. I will do my best, that’s the target, but nothing is for sure right now. It would be nice come Sunday. I hope they have this in mind, maybe they can prepare a cake or something, that would be nice!”

“In Aragon, we had a problem with the braking, and I didn’t feel good in this area, but for Assen, it’s important to improve this problem. Every race weekend we try 2021 and 2022 electronics, and now we are improving the new one. The new one we will improve each weekend and this weekend, we will use the 2022 electronics. The other Yamaha riders are improving, because I’m not working alone and they’re also working for the new electronics. We are coming to ‘my tracks’ now. Last year at Assen, it wasn’t a great result for me and in one race, I crashed. I know my problem at this track but this year we have improved it, so I think we’re fighting for the win this weekend.”

Iker Lecuona (Team HRC): “Didn’t expect to start in this position… best for Honda in many years”

“I’m really happy to be back in the paddock! It was already a very long winter, but unfortunately due to the injury, I made the winter even longer. Things are going well. I’m getting better every day. I’m really happy to be here at Assen. It would’ve been really disappointing to miss my home round. On the other side, it’s my first time on the bike this year. It’s a nice place to be on the bike. We have a good bike, but it’s not a winning bike. The only advice is to stay calm. We know what we have to develop. It’s tough, especially with such a close Championship. A couple of tenths and we’ll gain a lot of places but it’s not easy to find these couple of tenths.”

“At the moment, we have done just the Aragon Round, so I only have the feeling from that circuit. I think that turning the bike, I need to use a lot of rear grip in the entry of the corner. When the rear tyre goes down, I lose a little bit of confidence and I can control the bike less. I think we have to focus on that. Just make the bike turn a little bit better. Here we are at a different track, I think it has fewer long corners, so maybe the tyres can last a little bit longer. The goal is to be able to fight for the podium in all three races. After we have missed the Aragon podium, I want this one really, really bad. Every track is a different story. This is our goal.”

Scott Redding (BMW Motorrad WorldSBK Team): “We were just too far away…”

We kind of know the issue but we’re kind of locked with what we can do in this situation at the moment. For me, it’s more working on the electronics side of things, trying to help our problem. I think the track layout is what’s probably going to help us the most. Let’s see what we can do and see if this weekend brings us a step and see in the future. It’s not going to be a nice, clean improvement; it’s going to be rocky on the way. As long as we’re going forward, I’m happy with that. I always said we were too far away; I didn’t want to blow smoke up my ass about it. We were just too far away, so coming into a race weekend, it isn’t going to be any better. I think we’ve just got to keep working in the line that we’re following and see if we can build up.”

Xavi Vierge (Team HRC): “It was really good with two rookies… nobody expected it!”

“To go from the first round sixth in the Championship but with the same points as my teammate in fifth position was really good. Also, for the team, I think it was really good with two rookies to start the season like that. Nobody expected it. We need to have the feet on the ground because the gap between us and the top guys is quite big, so we need to work to be closer to them.”