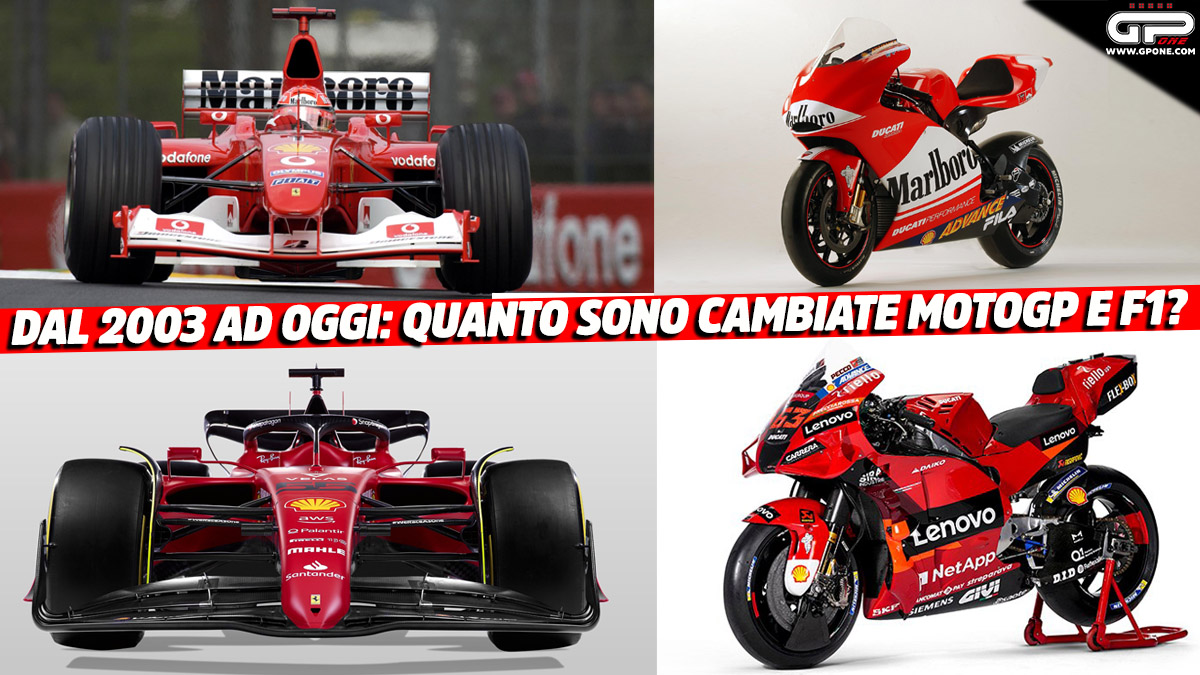 
Technology in motorsport makes huge strides every year. Some are more evident and mainly concern the aerodynamics that affect the shapes of cars and motorcycles, others concern the technical components and although they are less visible from the outside, they represent the true soul of any project.

Observing the evolution of MotoGP and Formula 1 cars over the last 20 years, it is plain to see how much the formula of both disciplines has changed and perhaps from this comparison it is even clearer how MotoGP has come the furthest, at least in proportion. On the cover page of this article there are two Ferraris and two Ducatis, respectively from 2003 and 2022. Almost twenty years of history of Italian red machines that reflect the entire history of the two disciplines.

Obviously, Formula 1 remains a cut above any other vehicle powered by an engine on any track and already in 2003, the technology on board was impressive. On the other hand, in 2003 MotoGP was virtually a newly-created category, Honda leading the way with its powerful V5 and Ducati preparing to launch a huge challenge after dominating in SBK.

In its approach to MotoGP, Ducati chose to place the foundations of the project on very clear key points. The technical regulations of the time would never have allowed it to be competitive by deploying a twin-cylinder, so they chose to adopt a V4, at the time a sort of anathema for Ducati fans all over the world. At least the firing ‘bangs’ were of the Twin Pulse type, as if to simulate the behaviour of a large twin-cylinder. But while an exception was made for the engine, Ducati DNA remained unchanged on other elements, such as the trellis frame and the Desmo distribution system. 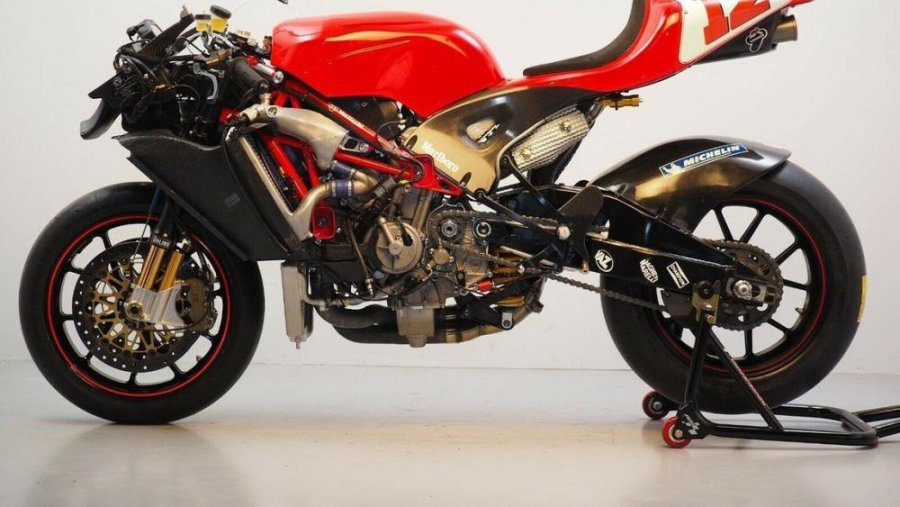 Although the lines of the GP3 were very clean, without any aerodynamic appendages on the fairings, Ducati was already at a very advanced stage with aerodynamic studies and to define the shapes of this bike, Alan Jenkins was hired, directly from F1 where he had held the role of Technical Director in several teams, including the defunct Arrows outfit. In Ducati they soon understood that to challenge the Japanese it was necessary to play on a slightly different field and also from the point of view of electronics, the first incarnation of the Desmosedici was very advanced compared to its rivals, although far from today’s standards.

At the same time, Ferrari had been running wild in Formula 1 for the past three years with Michael Schumacher in the cockpit. The German at the end of 2002 had won his fifth world title, bringing to the track, among other things, a car so advanced that it was defined as the best single-seater ever, the F2002. A car so fast that it was also used in the first races of the following season before giving way to its heir, the F2003GA, where GA was a tribute to the Avvocato Gianni Agnelli, who died before the presentation of the team for 2003. 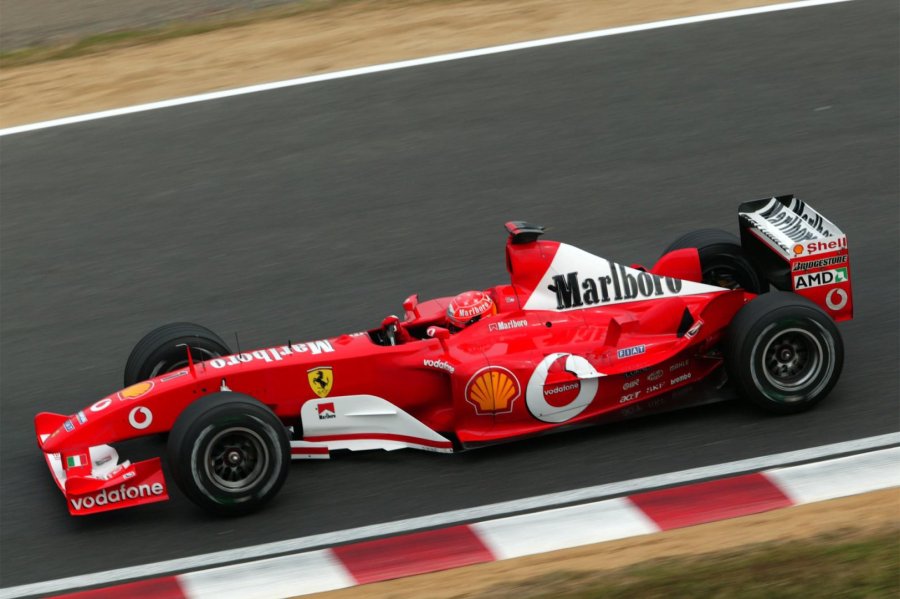 Powered by Maranello’s V10 unit, the F2003GA represented the sum of the technology available in Ferrari and took the aerodynamic concepts already tackled with its ‘mother’ to the extreme. Aerodynamic research was so advanced that it also influenced the mechanical part of the car. In practice, the engineers dedicated to aerodynamics asked for certain spaces to take advantage of the air flows inside and outside the car, and the mechanical engineers were forced to work on these indications. We can still remember the words of Ross Brawn at the time, when he said that an F1 car now looked more like a fighter plane than a road car. Among other things, the F2003GA was also the protagonist of a challenge between Michael Schumacher and the Eurofighter, but that’s another story.

Leap forward almost twenty years and here we are in front of the heirs of motorcycles and cars mentioned above. At first glance, one might almost think that the development of F1 has progressed much slower than that of MotoGP. We challenge anyone to find great similarities between the Ducati GP3 and GP22, in addition to both having wheels. This changes slightly with the F2003GA and F1-75 because some similarities remain pure genetics from Formula 1’s DNA, but only at a very superficial glance. 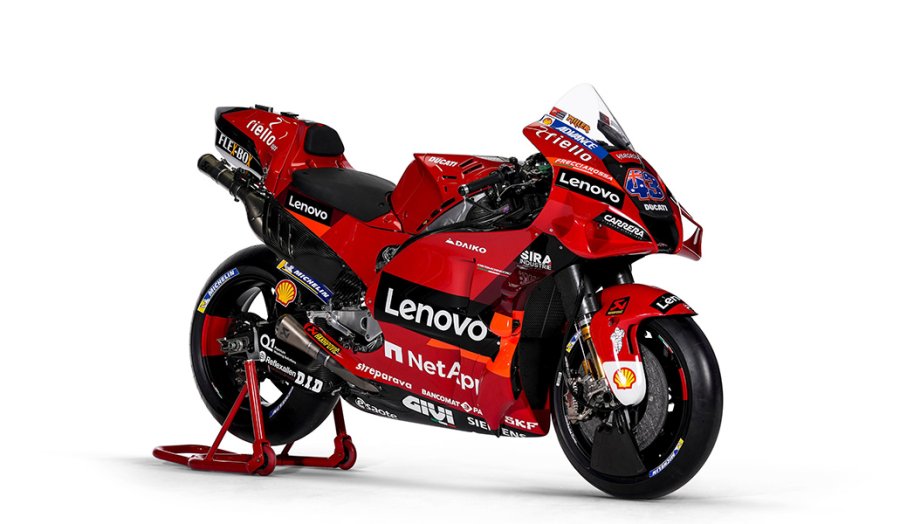 The reality is that in both areas the steps forward have been enormous and if we wanted to summarize them in a few lines, we would be making a big mistake. As far as MotoGP is concerned, it is clear how crucial aerodynamics has become compared to 2003, with a proliferation of wings, winglets, channels, spoons on the Ducati fairings. Under the fairings then there are other equally important elements to make the two bikes very different, such as a seamless gearbox, the front and rear lowering devices and obviously an electronics package which for its computing power probably exceeds every expectation in 2003. The engine remains a V4, but the technology behind the project is from another era compared to Ducati’s first V4.

In Formula 1 it is a clear reflection of how much the world has changed from 2003 to today. The power unit of the F1-75 is a mechanical object of such a different nature to the V10 of the F2003GA that it gives the impression of coming from another planet. Six cylinders instead of ten, an electric system to support the work of the internal combustion engine making it a hybrid and a total power output of about 1000 hp that allows these cars to constantly set new records on each track. We are talking about 250 hp more than that available to Schumacher in 2003.

The new technical regulations of 2022 have distorted the shapes of the cars, which now really seem to be more current and modern, and each team is interpreting this change in a different way, with the possibility that even the values ​​on the track might change a lot this season. The new 18-inch Pirelli tyres greatly change the aesthetic impact of the cars, especially in the side view and in general the sinuosity of these latest generation F1 cars seems to emanate more charm.

After talking about how much MotoGP and Formula 1 have changed from 2003 to today, the most interesting question remains. Is it for better or worse? Were the 2003 bikes better, simpler in lines and also less extreme from all points of view, or does the spaceship that is the GP22 embody the best of two-wheeled engineering available today and is therefore just better?

And instead F1, which has gained sinuous shapes and a lot of technology but has lost part of its soul with the abandonment of the powerful V10 and then V8 and as a result can that heavenly sound that they were able to emit, can still be defined as F1? 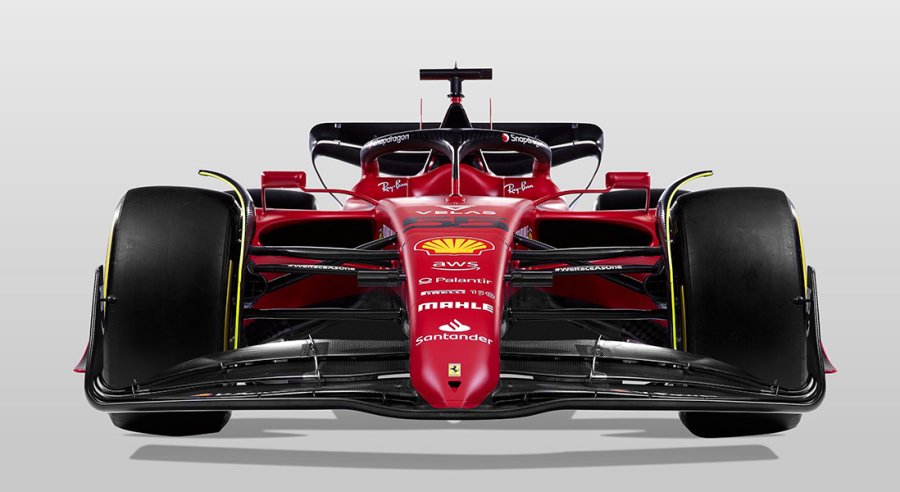 The truth is almost never that complex. The old adage ‘things were better when they were worse’ breaks down if we look at the races of the last few seasons in both MotoGP and Formula 1. Entertainment galore, great balance between the performance of individual cars and motorcycles and thrilling championships in general. In 2003 Schumacher won almost dominating and only the stubbornness of a great Kimi Raikkonen did not allow him to celebrate the title victory in advance.

In MotoGP, Honda dominated and Valentino Rossi enchanted, while in the tests at Mandalika and Sepang often six different bikes were found to occupy the top six positions in the rankings. In Formula 1, the 2021 world championship was one of the most spectacular in history, although the finale was not at all worthy of what was seen on the track in the magnificent duel between Hamilton and the champion Verstappen.

Ultimately there is no single answer to this question because we are talking about different eras, different technologies and even sports that in a certain way have changed to the point of being almost different. We leave all judgments to you and we are pretty sure that the same judgments will be deeply conflicting based on your personal experiences related to motorsport. We like to think that after so many years, Italian red machines still fascinate more than any other vehicle on the track and there are very few doubts about this.

Evergreen: This Moto Guzzi V9 is a spin on the enduring V8

MotoGP, Ducati singularity: leading the world manufacturers’ championship, but without Bagnaia and Miller