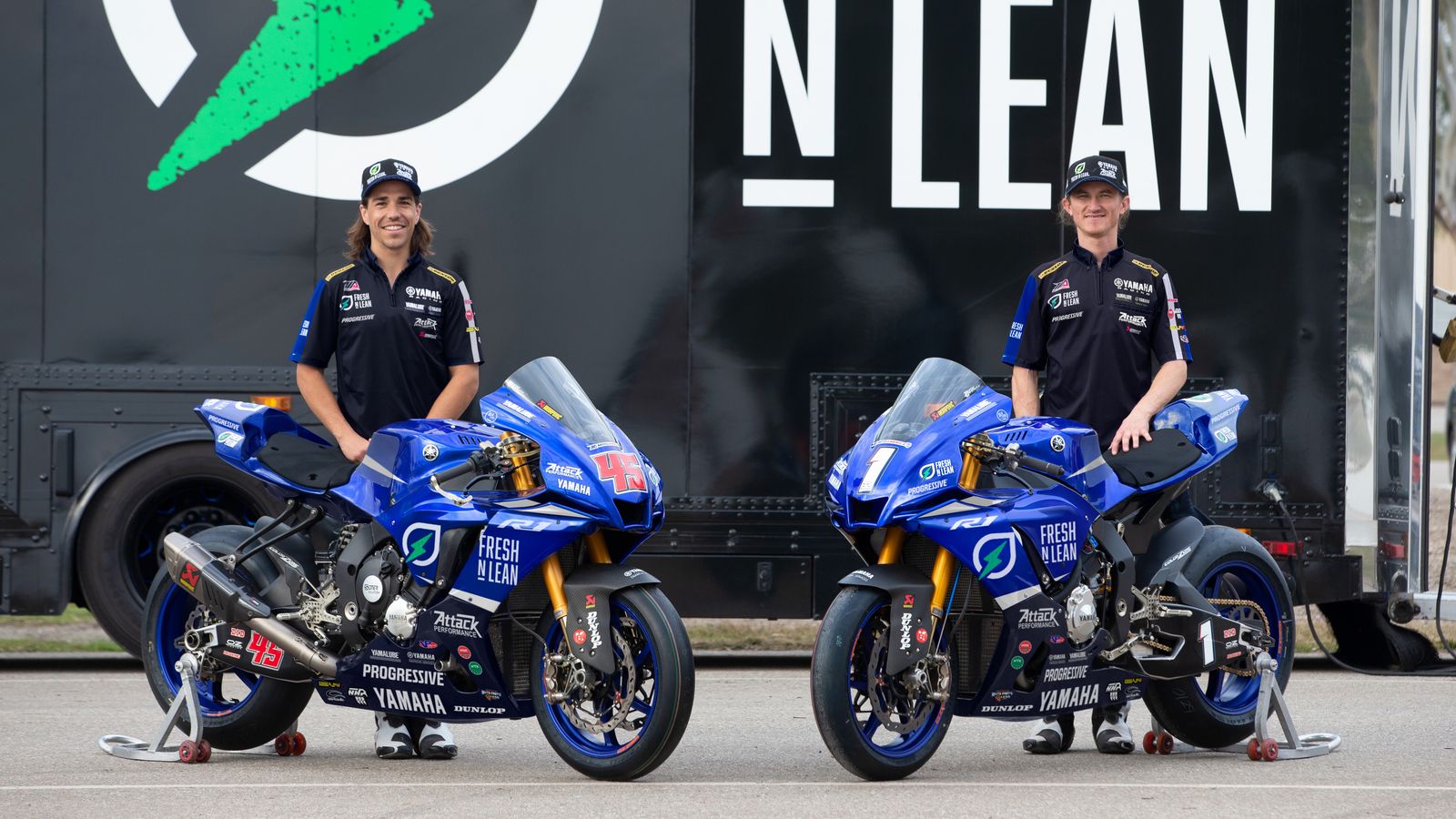 Yamaha Motor Corporation, U.S.A. is pleased to announce the Fresh N Lean Progressive Yamaha Racing team, which will head its efforts in the MotoAmerica Superbike Championship aboard the Attack Performance Yamaha R1s for the next two seasons. The team will field a two-rider effort led by the reigning MotoAmerica Superbike Champion Jake Gagne and new addition Cameron Petersen.

Fresh N Lean, America’s #1 Ready-to-Eat (RTE) meal delivery company, returns as the title sponsor and will continue to fuel the team for championship-proven performance on the track with quality nutrition that is easily prepared, organically sourced, and available in a variety of diets; all focused on optimizing human potential. Coming on board this season is another industry leading sponsor – Progressive Insurance, a leader in the commercial auto insurance industry and the #1 motorcycle insurer in the United States. Returning to the team’s powerhouse line-up of partners is Yamalube and Yamaha Financial Services.

Yamaha also extends its partnership with Attack Performance, one of the sport’s leading manufacturers of high-performance components and services for modern sportbikes. Since 2020, Attack has carried on the winning tradition of the Yamaha R1, enjoying two dominant seasons with 33 victories and two titles in the premier class. Attack Performance principal Richard Stanboli will also return as the team manager.

Gagne enters his third season with the team and aims to keep the #1 on the front of his Attack Performance Yamaha R1. Last year was a standout season for the Colorado rider who added several record-breaking accolades en route to claiming his first title in the premier class a weekend early. He notched an impressive 16-consecutive race wins, and then added one more victory to score the most wins in a season, putting him tied on the all-time win list with Nicky Hayden and making him the active leader in Superbike wins heading into the 2022 season. Gagne also has a pair of support class championships to his credit – the 2014 Daytona Sportbike Championship and the 2015 MotoAmerica Superstock 1000 Championship.

Petersen joins the team in 2022 and also has a championship-proven history in the support class category, taking the MotoAmerica Stock 1000 crown in 2020. The South African had a solid return to the premier class in 2021, scoring his debut Superbike victory at the season finale in Barber and ended the year third in the points standings with a total of five podium appearances. He looks to build on his progress in the MotoAmerica Superbike Championship as he returns to the Yamaha bran

In addition to the 10-round MotoAmerica Superbike season, the team will race the Daytona 200 aboard the Attack Performance Yamaha R6 as the series makes its debut at the legendary Daytona International Speedway in Daytona Beach, Florida, on March 10-12.

“This is my third year now with Yamaha, and I really feel a part of the family – said Jake Gagne – I’m just so thankful that I’ve got a couple more years of racing superbikes here on the R1. It’s the best bike I’ve ever ridden and the best crew I’ve ever had, so for me, I’m just really enjoying it. Especially coming off of that amazing year last season, we want to keep doing our job and try to win as many races as we can and try to win that championship. I know it’s not going to be as easy to pull off what we did last year, as the other guys are really going to try and not make that happen. We’re going to keep fighting and do what we can. I’m just so happy to have such a great group of people around me. “

“It’s been a dream of mine to ride for Attack and Yamaha – added Cam Petersen – I’m so grateful that Tom and Richard believed in me and gave me the opportunity. I know that this is the kind of opportunity that comes around once in a lifetime, so I’m prepared and ready to make the most out of it. I’m really looking forward to the upcoming season and want to grab this opportunity with both hands and make Yamaha and everybody proud. I feel like I’ve got two good years under my belt now with positive things happening in the sport, so I’m ready to keep that forward momentum going and win some championships.”

MotoGP, Marini: “If the race had been today, we wouldn’t have been able to...

WorldSBK: Race One Outcomes From Portugal (Up to date) – Roadracing World Journal