Home MOTORCYCLES The Motorcycle Of The Future From 1991


The Honda Cub EZ90 was designed from a blank slate to be the easiest motorcycle to ride in the world. It has an electric starter, an automatic transmission, a sealed final drive chain, a futuristic body design, and a low seat height of 29.5 inches (749mm).

Honda developed the Cub EZ90 as a new member of the long running Honda Cub family, releasing the new model in 1991 and selling it until 1996. It was designed to offer simple off-road thrills for those who had never ridden a motorcycle before.

When it was released in the early 1990s the Honda Cub EZ90 was hailed by some as the “world’s easiest motorcycle” due to the fact that it had no clutch, no manual gearbox, and a very simple, user-friendly design.

The advertising for the EZ90 extensively extolled its virtues as a simple and easy to ride motorcycle.

The EZ90 wasn’t developed to meet the expectations of experienced motorcyclists but rather for their spouses, kids, friends, and family who were curious about motorcycles but perhaps a little afraid of them.

Things like kick-starters, exposed drive chains, clutches, and manual foot-operated gearboxes can tend to pose a significant barrier to entry to the world of motorcycles for many. Scooters have largely addressed many of these issues of course, but Honda wanted something with a little more off-road capability.

The end result is essentially an off-road scooter, with added ground clearance, longer travel suspension, a bash plate under the engine, and hand guards on the handlebars.

Once you remove the futuristic plastic bodywork, Honda Cub EZ90 looks much more like a standard small-capacity motorcycle or scooter. It has a steel frame cradling a 90cc single-cylinder, two-stroke motor that relies on air-cooling and an automatic oil injection system. 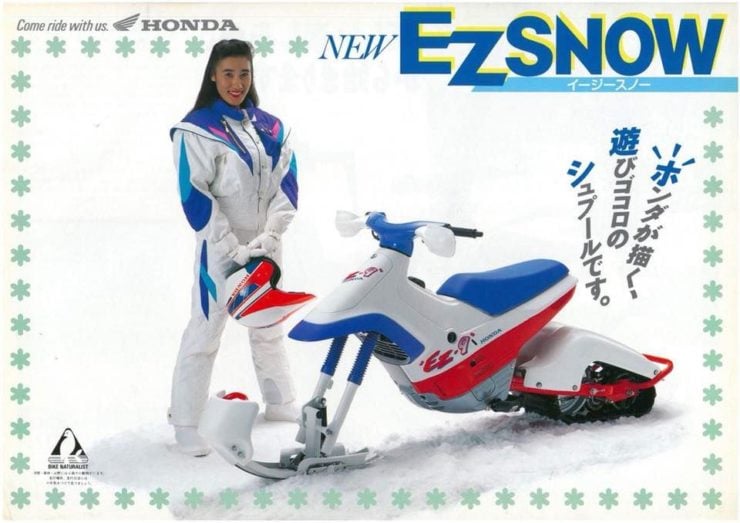 A special snowmobile version of the EX90 was released, it was called the EZ-Snow and it had a tracked rear with a ski up front for steering.

Power is sent to the rear wheel via a variable-ratio automatic transmission through a sealed chain final drive. The EZ90 did come equipped with an auxiliary kickstarter however it had a built-in electric starter that was typically used, unless you had a flat battery of course.

Suspension consists of a rectangular-section tubular steel swing arm in the rear with a monoshock offering 4.3 inches of travel. Up front you’ll find traditional 27mm telescopic forks with 3.9 inches of travel, and protective fork gaiters to keep dirt out.

Drum brakes are used front and back, and there’s a steel bash plate under the engine to protect it should you happen to bottom it out hard enough.

Lifting the seat gives you access to the oil tank and the air filter, the fuel filler cap is in front of the seat, and the plastic body incorporates two lockable storage areas for carrying snacks, spares, and supplies. 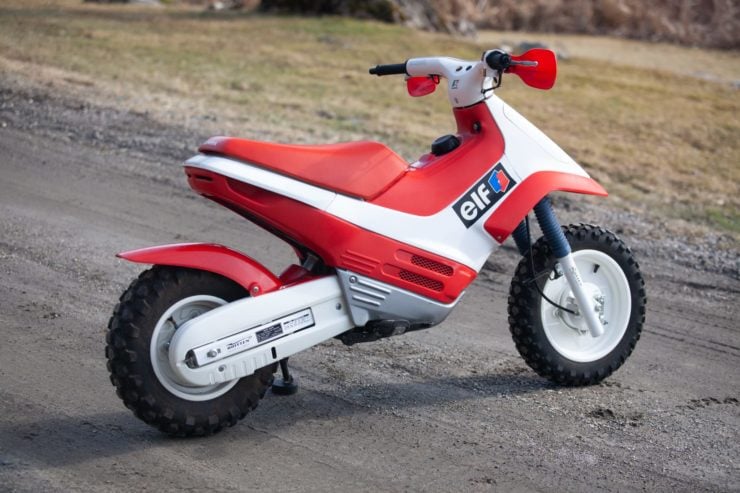 The futuristic styling and and ease of use has been winning the EZ90 fans for over 30 years and counting.

The bike you see here is a beautifully preserved 1994 Honda Cub EZ90, it looks to be in almost new condition throughout and it carries red and white paintwork with “Elf” livery.

The listing doesn’t contain a wealth of information, likely this is because the current owner bought the bike just two years ago. It does come with an owner’s manual, Honda tools, two keys, and a bill of sale.

We don’t often see these come up for sale in this kind of condition, usually they look a lot rougher as they’ve typically been used by many people over the years to learn how to ride – resulting in many crashes at varying speeds.

If you’d like to read more about this Cub EZ90 or place a bid on it you can click here to see the listing. It’s being offered for sale on Bring A Trailer with no reserve out of Great Barrington, Massachusetts. 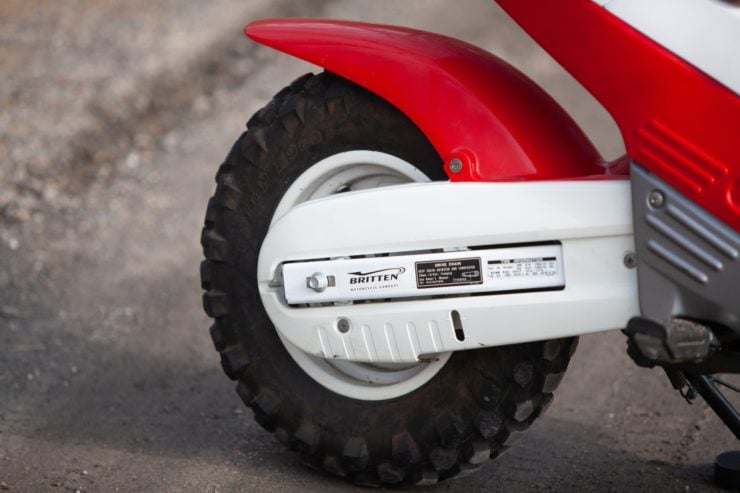 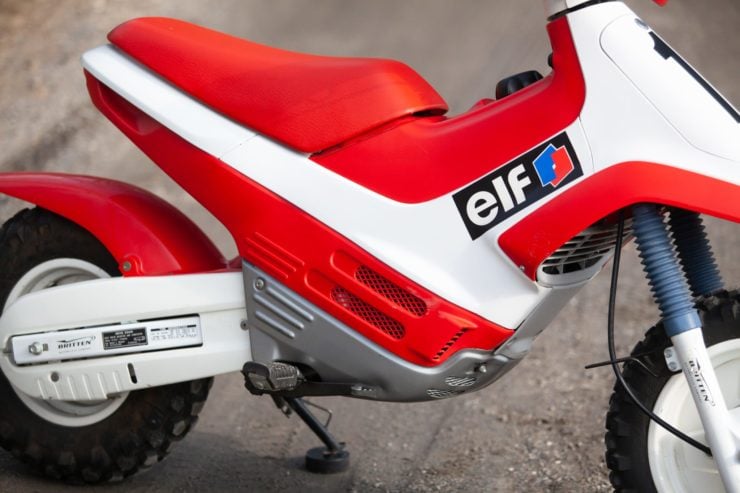 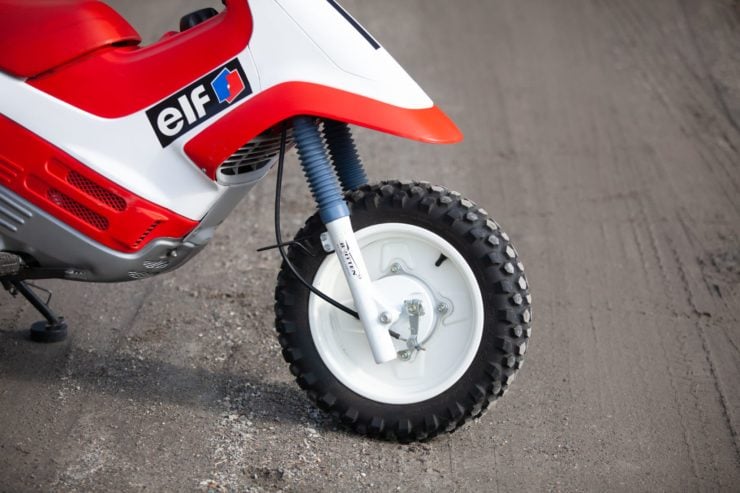 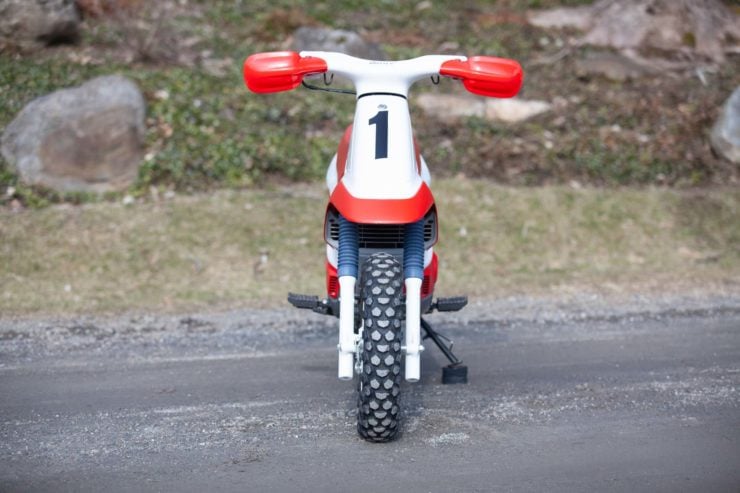 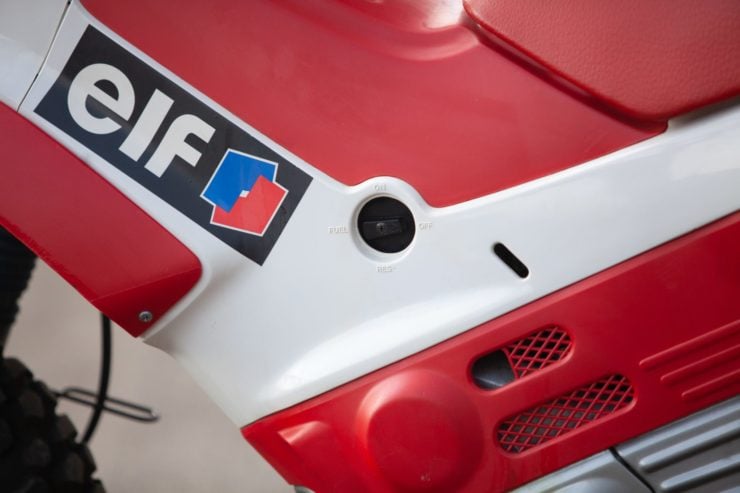 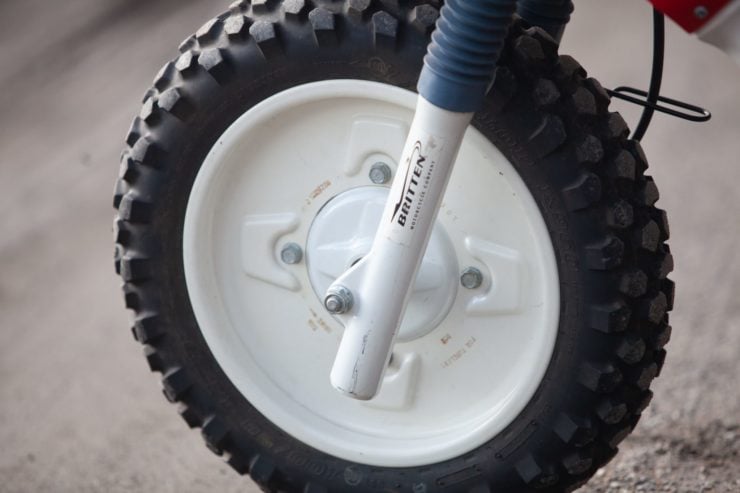 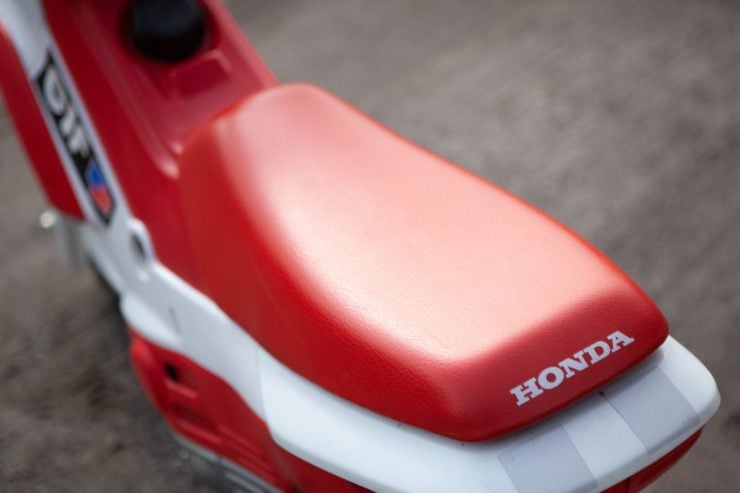 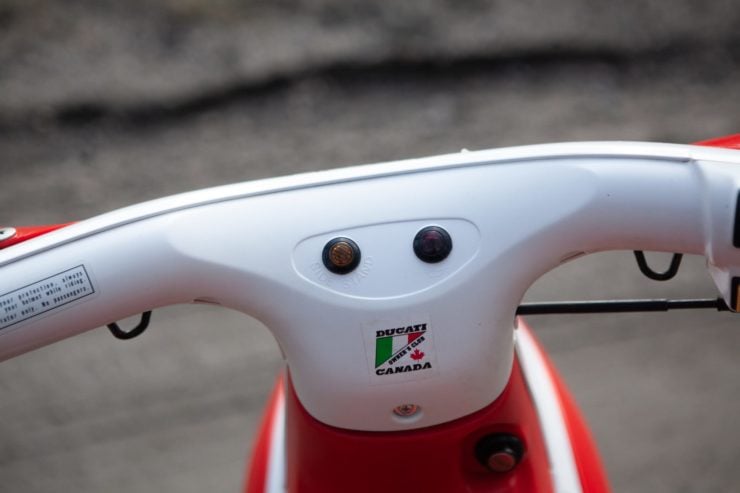 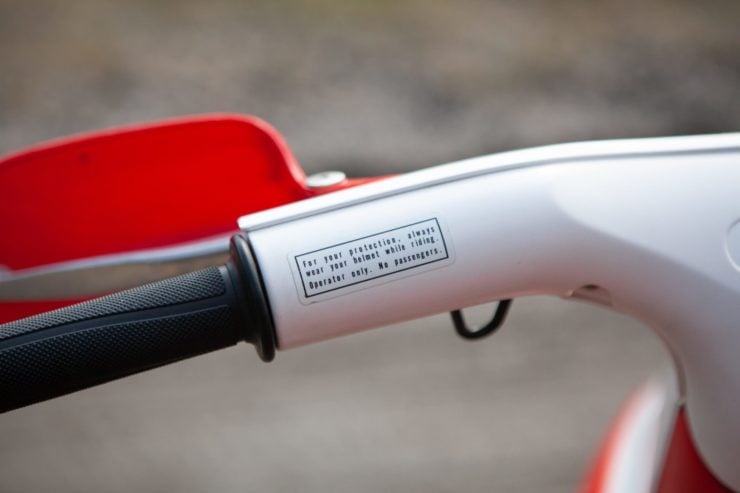 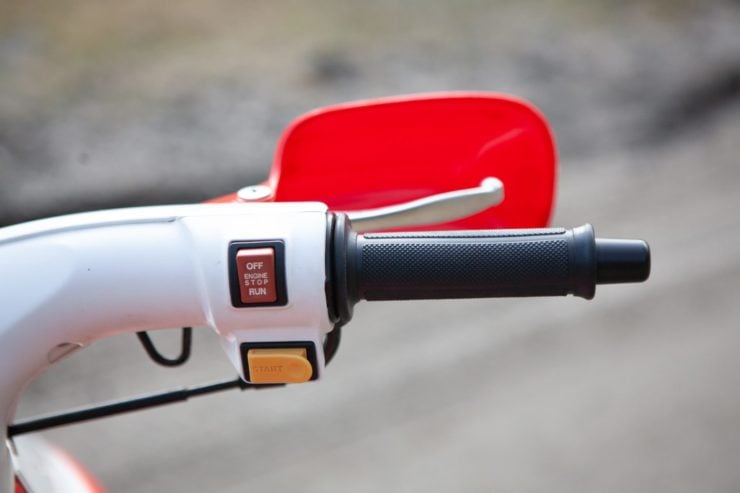 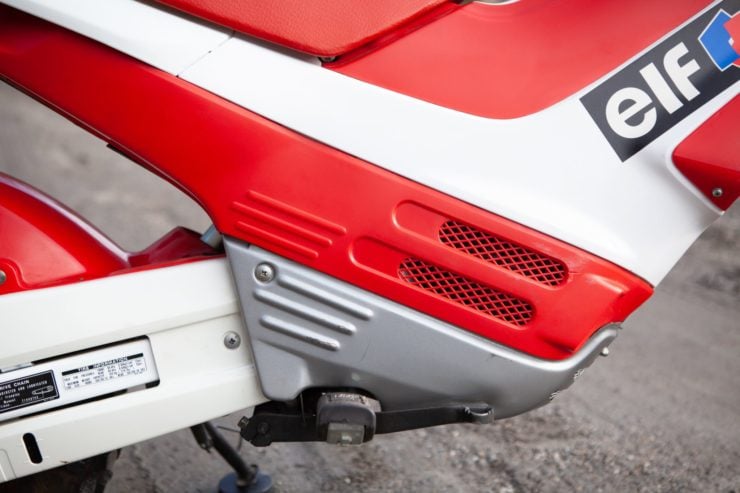 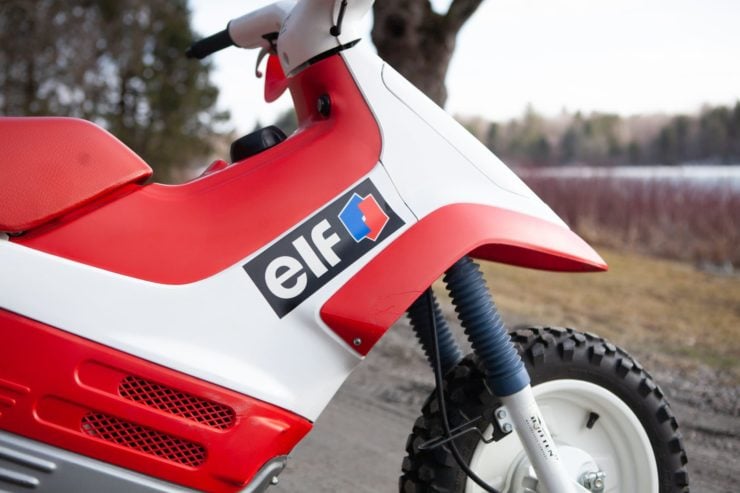 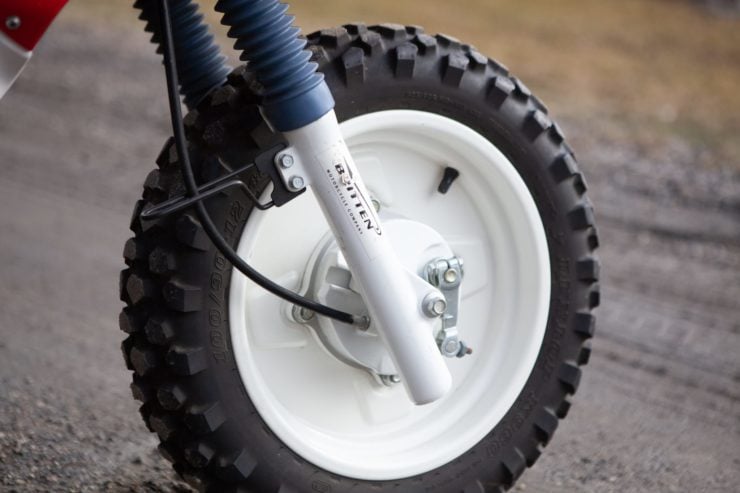 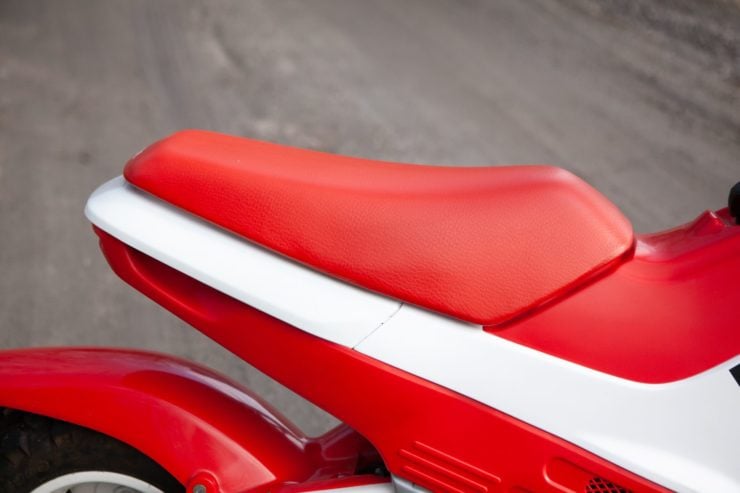 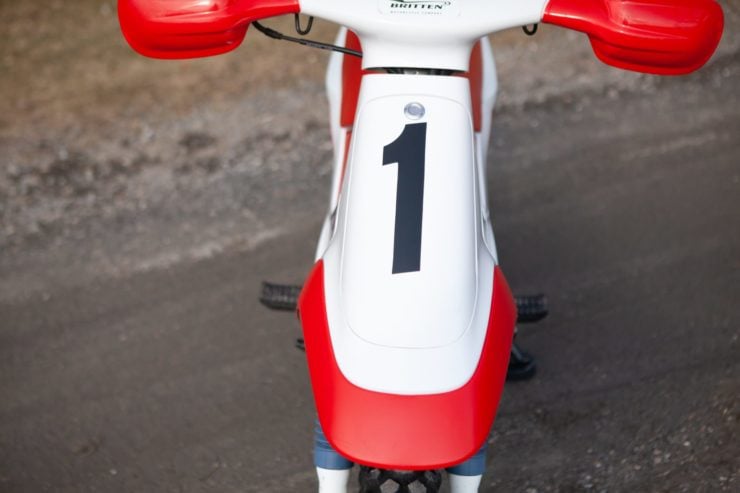 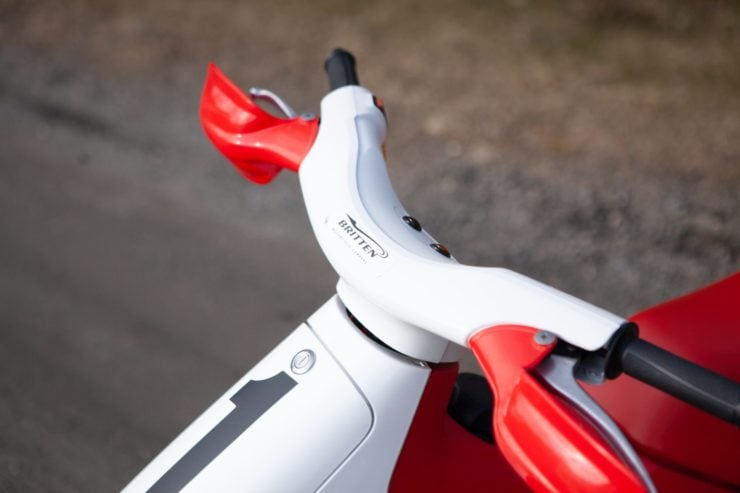 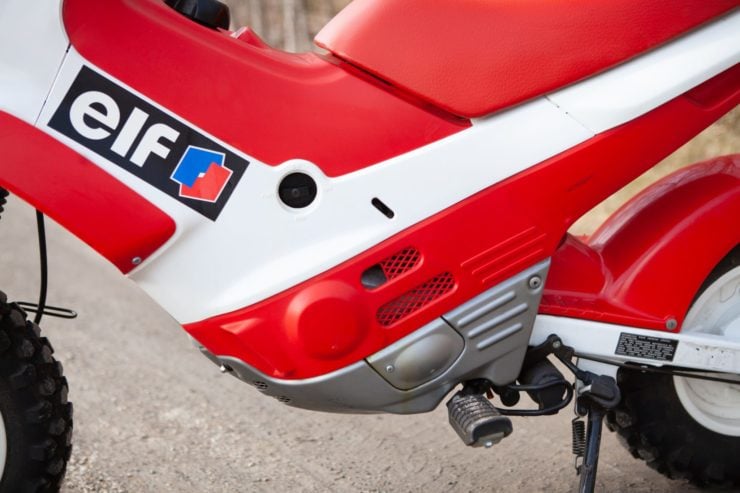 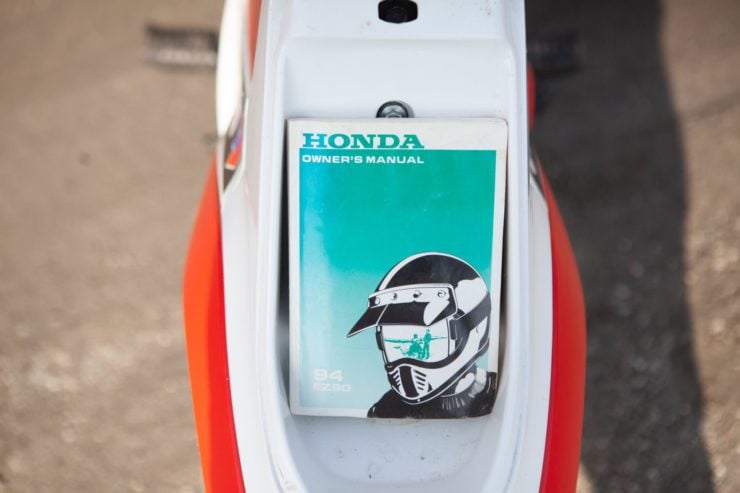 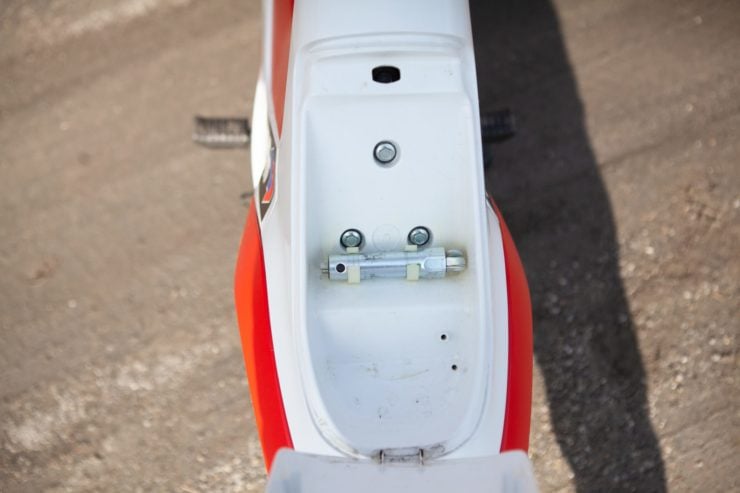 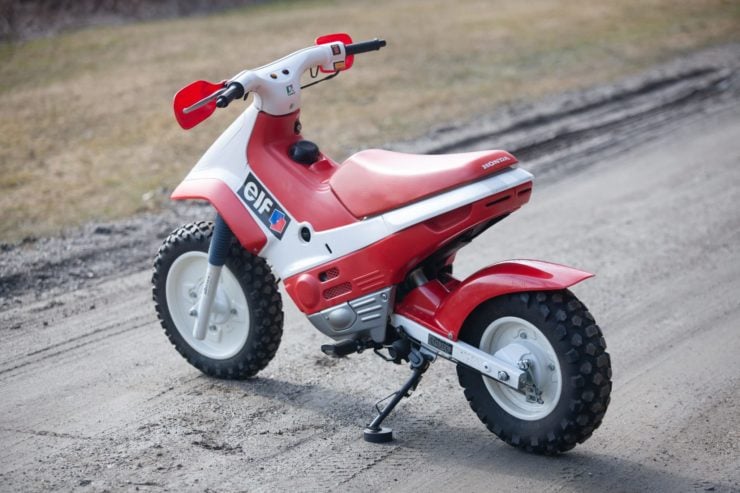 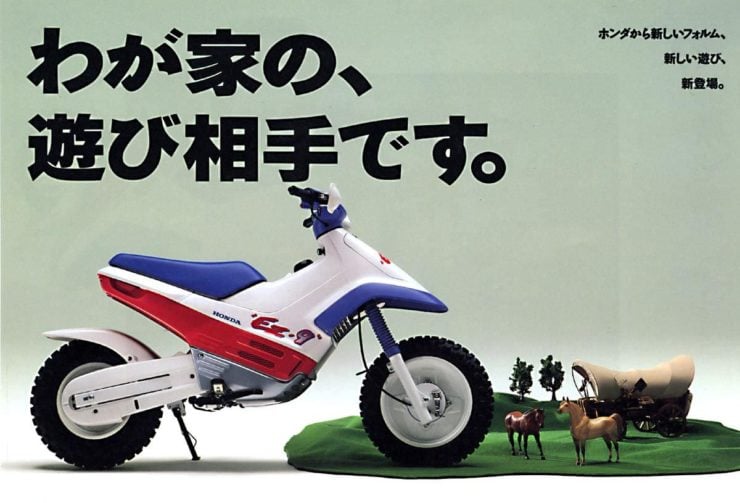 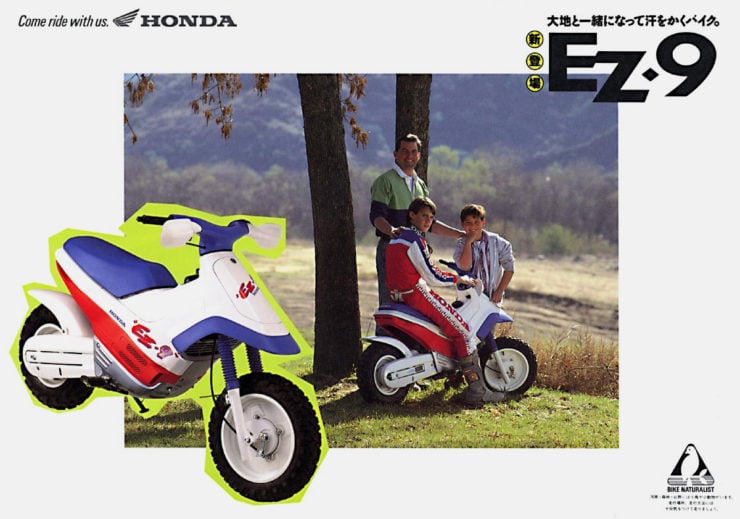 Images courtesy of Bring A Trailer

MotoAmerica: Escalante Will Not Experience In Superbike Race Two At Brainerd

MotoGP, Wayne Rainey back on the Yamaha 29 years after his terrible accident