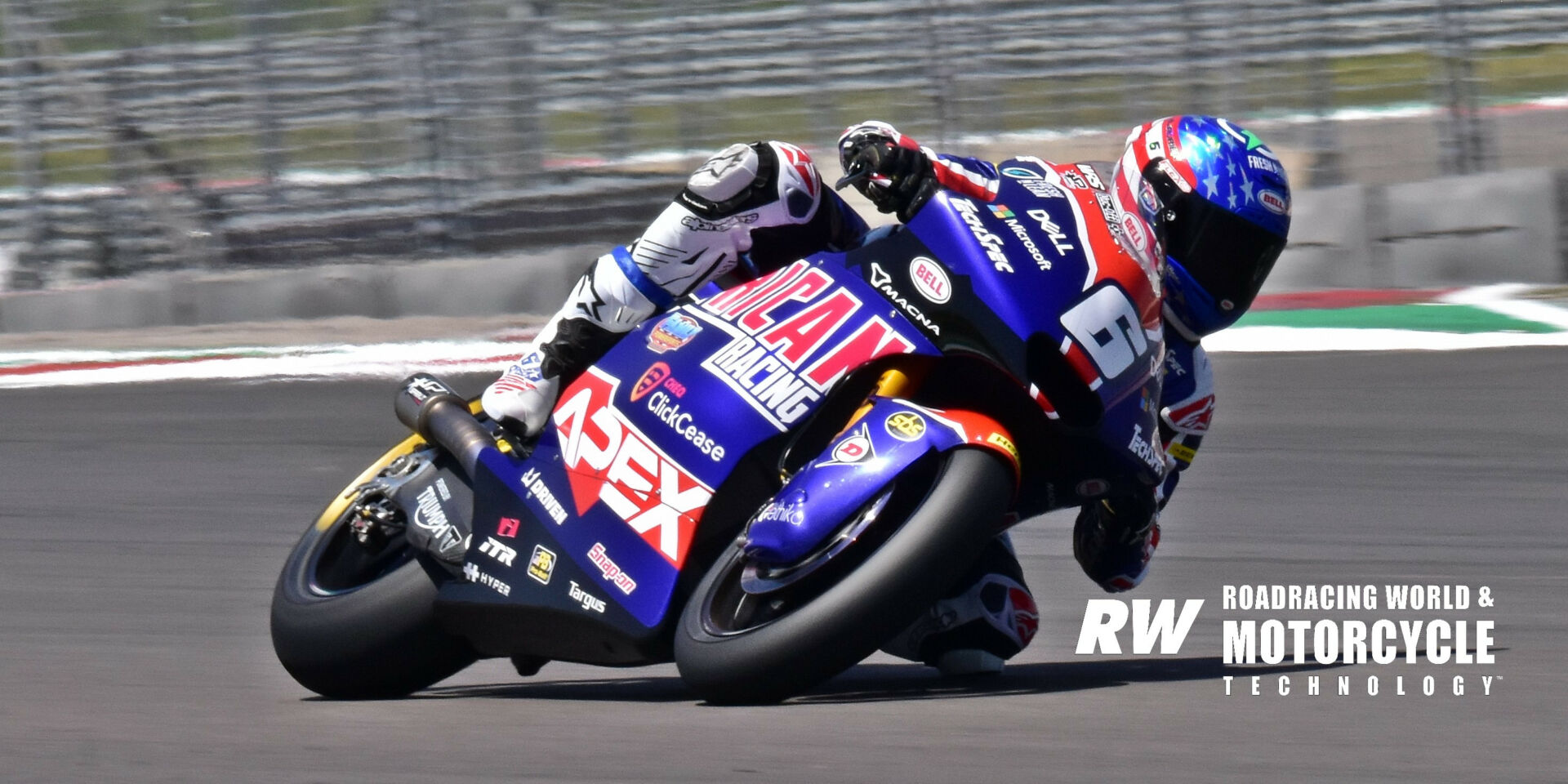 More, from a press release issued by American Racing Team:

History maker: Beaubier on pole position at the Grand Prix of the Americas!

American Racing makes history with the first American rider on an American team to take Moto2 pole position in the USA!

Back on home soil, Cam quickly adapted to the mostly resurfaced Circuit of The Americas as the Californian ended the combined practice sessions comfortably within the top ten to secure his direct passage into Q2. Keeping his head down, Cam put in the work in front of his home crowd to give the Texan crowd something to cheer about as he delivered a faultless lap to snatch his maiden pole position in Moto2, and the new all-time lap record.

On the other side of the garage, it was a difficult start to Sean’s home race weekend. The rookie suffered a heavy crash at turn eleven in FP2, picking up an injury to his hip but he gritted his teeth and soldiered on as he continues to find his feet in the Moto2 class. Struggling against his injury, Sean ended qualifying in 28th as he prepares to put on a show for the home fans tomorrow in the race.

So put on your red, white and blue, and cheer all you’ve got for the boys in tomorrow’s Grand Prix of The Americas!

“I was not expecting pole. My goal was just to qualify on the first two rows, that way I can have a clean start tomorrow but I just felt hooked up. The American Racing Team boys have been working so hard this year and especially this weekend. I know this track has been good for me, it was last year and I knew we could put on a good showing this year. Obviously, it’s just qualifying so I don’t want to get too excited, but it feels so good after the struggles we went through last year, there were definitely a lot more lows than highs but we’re trucking along and this year, we’ve been riding around the top 10, floating thereabouts and it definitely motivated me coming here.

Rolling around the track on the cool down lap and seeing the fans go crazy, it means everything to me to be riding in front of the home crowd and, to put it on pole, it feels pretty dang good! I’ve miss wearing this yellow Dunlop cap, I didn’t think I would but it’s been a couple of years so it’s going to have a special place at home.

My quiet goal coming into the weekend was, at minimum, a podium but we’ll see. It’s going to be a long race as 18 laps around here is no joke. Canet and Vietti are riding incredible right now, especially Vietti to come through Q1 after a tough day yesterday and put it on the front row, it’s pretty incredible stuff. They’re riding on another level but I feel really good here this weekend and I think we could have a good race here tomorrow.

Shout out to the American fans! It’s incredible to see how many people have turned out just for Saturday to cheer us on and I’m wearing the red, white, and blue proudly!”

“It was definitely a challenging day. I’m happy I was able to get back on the bike. We need to look at the positives: I’m in one piece, I got through qualifying and I’ll be in the race tomorrow but it was definitely a challenging day after yesterday. The hip is feeling very sore and unfortunately, I had some other issues as well today so it just made it a challenging day but we just need to absorb these tough moments. I knew we were going to have some hard days this year and this is one of them. I just need to keep my head up and, going into tomorrow, hopefully we get to the chequered flag so we can give the American fans a big thank you.

I’m super stoked for the entire team and Cam! I think that everyone really deserved that, I think Cam definitely deserved that after a tough year so I’m excited to see what he can do tomorrow.”

“American Racing getting a pole position on home soil is honestly a dream come true. Honestly, I feel better about this than I ever did about my entire racing career. To be able to give back, give that advice and help these riders maximise their potential and see the differences and then also get the appreciation and respect back from them. I really love this job.

Cam was calm, collected. I’ve never seen him so focused in my life. I just sat with him right before the start and I leant down and said ‘look Cam, treat this like any other MotoAmerica race. You’re here in America, you’ve got all your American guys around you, treat this exactly like you did all those times you showed up at Superbikes, knowing you could beat the rest of the field. You’ve been in the top three all weekend, you’ve already done the work, you’ve already taken care of the hard stuff, just go out there and keep doing what you’ve been doing all weekend and you can make it happen.’ He was calm, he was focused and he had that mental edge, that mental confidence that you need. This championship is so tight, it’s so close, we’re talking tenths, they make such a huge difference so just having that mental confidence is all he needed to make that next step and I think that we’re going to see the new Cam Beaubier in the Moto2 Championship for the rest of the season.”

More, from a press release issued by Italtrans Racing:

No break for the MotoGP World Championship which moved from Termas de Rio Hondo to the United States, in Texas, for the Americas Grand Prix.

The fourth round of the season will be race at COTA, the Circuit Of The Americas: a very challenging track, built under the supervision of German architect Hermann Tilke, well-known designer of many F1 tracks. Home race for Joe Roberts, who is more motivated than ever to do well in front of his home crowd.

Close to the top positions in all the free practices, once again the Malibu rider went directly into Q2. Unfortunately, due to a mistake during his fast lap, Joe did not catch the top ten, finishing the qualifying 16th. Tomorrow he will start the home GP from the sixth row of the grid for a comeback race.

Tough weekend for Lorenzo Dalla Porta, who faces this hard track, so demanding for his left shoulder. Consistent in his pace, the Tuscan rider stopped at Q1 with a best time of 2’11”288 and will start the Americas Grand Prix 25th.

“I knew it was going to be a tough track for my shoulder and in fact I am struggling a lot. We are looking forward to better times and in the meantime I will try to give my best tomorrow”.

“I made a mistake on my fast lap, which cost us a good qualifying position. Tomorrow is what’s important and our race pace is good. Looking forward to it”.

“We are trying to help Lorenzo to face this Grand Prix in the best way possible, without putting too much stress on his injured shoulder. We know it’s a difficult weekend, he has to find the grit”.

“Unfortunately, Joe didn’t shine in qualifying. He couldn’t find his pace and his times are below his potential. I think he could do a lot more, but he is under a lot of pressure, especially here at his home race”.

Lyndon B. Johnson’s 1964 Lincoln Continental Convertible is For Sale