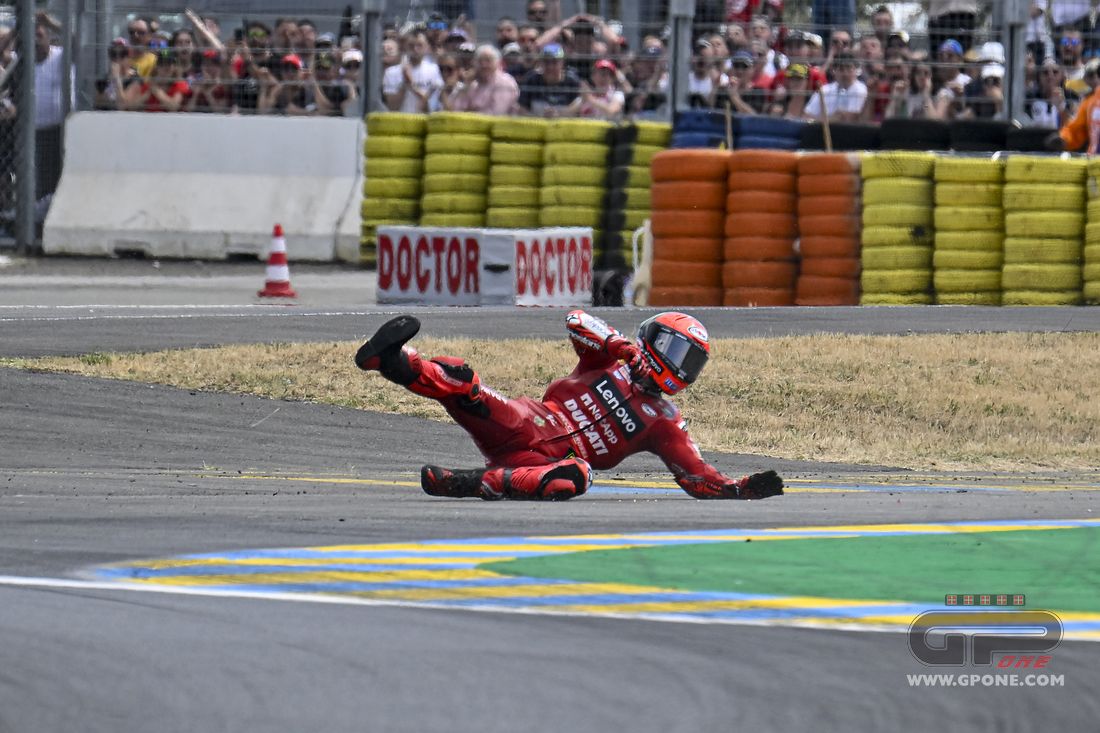 It could have been a decisive day to get closer to Quartararo, to rebuild a season started badly. Instead, Pecco Bagnaia ended up picking up the pieces and taking the blame for something he didn’t do. His pace was good, he put himself at the helm of the race, until he responded to Bastianini’s attack and fell.

“It had been a perfect race,” he says. “I had managed it well. I was keeping a good pace. When Enea caught up,  I used the same strategy I used with Marquez in Aragon last year. I immediately got back in front of him. Then I made a mistake at turn eight. Today the front tended to get stuck in braking, and I went long. I braked too hard and, at that moment, I didn’t pressure myself. I thought I’d catch up calmly, also because I knew it would be easy to fall. I came in a little too slow on the next-to-last corner… and I lost twenty five points.”

Did you push too hard?
“I was keeping my pace, the one I had yesterday in the FP4 and this morning in the warm up. The only difference was the medium front tire instead of the soft one. I chose it because of the higher temperatures, but that wasn’t the problem.”

So what was?
“I was just a little slower than usual but, even looking at the data, it’s hard to understand. Now I’m just angry.”

Were you surprised to see Bastianini up front?
“No, if anything, the surprise is that there was no Quartararo. Like I said, everything was going just as well as in Jerez,  even the heat wasn’t a problem. I knew that Enea had a good pace too. He was faster in the first sector of the track, I was in the last two. Now I have a few days to figure out what happened and get better, because you don’t win the world championship by making these mistakes. The time has come for me to be more mature.”

What do you mean?
”I can’t afford these kind of mistakes. Last year, I fell at Mugello for other reasons and in Misano for an extreme choice of tires. Today it was an error of  immaturity. The real mistake was going long at eight. I thought Enea was closer, and I didn’t want him to get back in front. Then I thought I’d take a breather, and I fell. Sometimes, when you feel particularly good on the bike, you don’t realize how close to the limit you are. I threw away a plethora of points. Out of seven races, three went very badly. The only consolation is that I fell while struggling to win, but it still pisses me off.“

Bastianini mentioned that you said you preferred Miller to him as a teammate.
“I’ve been on the team with Jack since 2018. We know each other well. It’s normal that, if I had to decide, he would be my first choice because I like working with him. But it’s Ducati that chooses, and there would be no problem for me if it’s Enea or even Martin. I’ve always had good relationships with all my teammates. I also believe that Bastianini has proven that he deserves that place.”

He also said he thinks he’s been able to upset you.
“We’re getting off on the right foot,” he said laughing. “He can think what he wants, but the reality is that he was very fast, and I made a mistake.It was not a matter of pressure. However, it’s best that he won than someone else.“

Who do you see as a favorite for the World Championship now?
“There are many, and many are fast. Enea, Fabio, Aleix, the two Suzukis, Jack. Me, too. I think those who have more points have been better at not screwing up.“

The next race will be at Mugello. Is that good?
“It’s a track I like very much. It’s the home one and, last year, I was very competitive. It’s going to be another great weekend and, from now on, I think I’ll always be competitive. If I don’t screw up, that’s even better.”