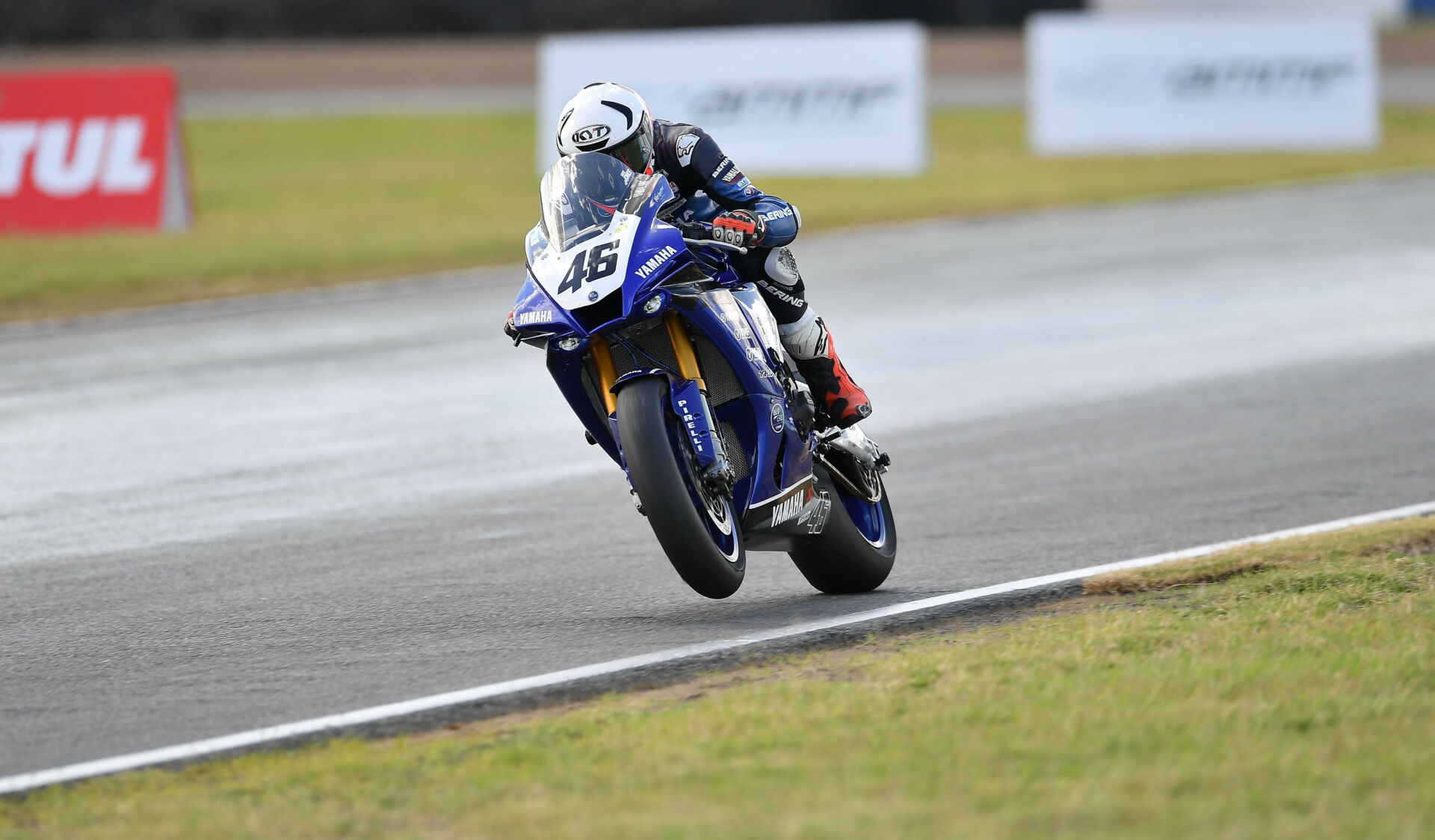 
Mike Jones gave his hometown fans plenty to smile about after topping the timesheets in Friday Practice for Round Two of the mi-bike Motorcycle Insurance Australian Superbike Championship presented by Motul (ASBK) at Queensland Raceway.

Jones (YZF-R1) hit-out early to clock just under a second ahead of Josh Waters (BMW M RR) and Cru Halliday (YZF-R1), while defending ASBK champion Wayne Maxwell (V4R), spent the first segment of practice cutting installation laps on his new bike (after damaging the front-end at Phillip Island a few weeks ago). Round one winner and championship leader, Bryan Staring (V4R) would eventually split Jones and Halliday, with Maxwell in fourth.

In the afternoon, it was Jones and Maxwell topping the order, with Jones’s 1:07.967 three-tenths quicker than Maxwell’s best, with Halliday a further tenth away in third. Most were expecting times to drop, but spots of rain in the afternoon thwarted any chance of improvement. Jones was comfortably inside the official lap-record at Queensland Raceway and pleased to make his mark on home turf so early in the weekend.

“It’s been a long time away for ASBK, but for me it’s my home circuit. I’ve cut so many laps around here and I’m really looking forward to the weekend,” said Jones.

“This circuit has a simple layout, but having only a handful of corners makes it hard to go fast.”

In Michelin Supersport, Jack Hyde (Yamaha YZF-R6) lead the way in Practice One, ahead of Olly Simpson (Yamaha YZF-R6) and Tom Bramich (Yamaha YZF-R6). In the afternoon sessions, but it was Simpson who stepped-up to go quickest outright by three-tenths of a second over John Lytras (Yamaha YZF-R6), with Hyde rounding out the top three by virtue of his earlier time.

James Jacobs (Kawasaki Ninja) dominated the Dunlop Supersport 300 class early, ahead of the ever-improving Taiyo Aksu (Yamaha YZF-R3), while Aksu himself was a mere three-hundredths ahead of Laura Brown (Yamaha YZF-R3) before Glenn Nelson (Yamaha YZF-R3) shot to the top of the order – three-tenths up on Cameron Dunker (Yamaha YZF-R6) and Aksu. Dunker would leap ahead in Practice 2 to go fastest overall with a 1:22.801 ahead of Nelson and Aksu.

The Horsell Australian Sidecar Championship made its return for 2022, with Phillip Underwood and Tristan Vercoe (Suzuki LCR 1000) staking an early claim ahead of Des Harvey and Stephen Marshall (Kawasaki RHR 1000), with Jamie and Shelby Turner (Suzuki LCR 1000) rounding out the top three. Underwood would again top the order in practice two, with Turner this time usurping Harvey in the afternoon to complete the final three positions.

All the action from the mi-bike Motorcycle Insurance Australian Superbike Championship presented by Motul (ASBK) continues with qualifying tomorrow from Queensland Raceway. Follow official live timing from Computime at https://www.computime.com.au/